The Rob Papen BLUE goes RTAS with the release of the 1.6 update. It is a free update with a native RTAS version for Mac. But also new features are added like a free running option for each oscillator, an 8x Oversampling option, a bypass function inside the Arpeggiator, Sequencer and the FX section. It all comes together with 6 new preset banks for various styles of music productions. 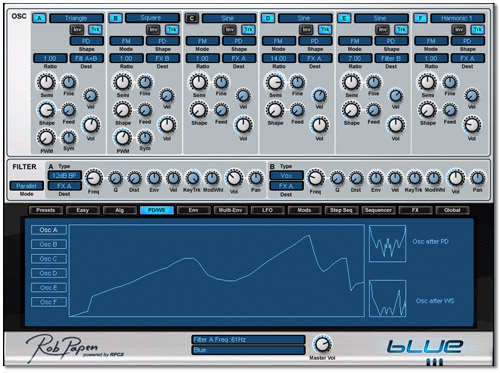 Details BLUE 1.6:
-RTAS (Mac)
BLUE 1.6 is now also native RTAS for Mac.
The PC version will be released later on.

-Bypass in FX section
This bypasses the arpeggiator and put BLUE in poly play mode.
Turning bypass off returns it to the original arpeggiator play mode

-8x oversampling option in Global page
BLUE has “built-in” waveforms, which means that they contain allot of harmonics.
That is good for the sound, but it sometimes produces aliasing in the upper keyboard ranges. An option is also to run your host at 88.2 kHz or 96kHz. But in case you do not want to that, Blue now offers 8x oversampling.

Early Oktober the first 3rd party BLUE soundset will be release as well with sounds from Tim Conrardy and Rsmus7. BLUE 1.6 is of course IntelMac compatible.