Industrial Tones is a synthesizer which plays an extensive set of industrial waveforms, processing these using a filter, envelopes, an LFO, an ensemble, delays and an effect section which features 133 different effect modes, including our unique crossfading effects and layered effects. 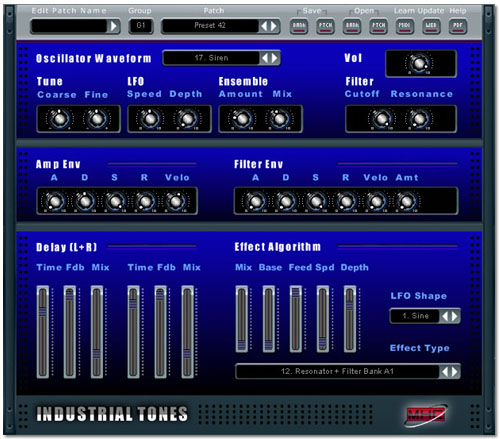 Main features are:
– 1024 presets, which are available in three soundpacks (included when purchasing the plug-in). A soundpack is an expansion which adds new industrial waveforms and a set of presets.
– Hundreds of industrial waveforms.
– Crossfading and layered effects involve distortion, filter banks, a resonator, flanger, sub oscillation, amp modulation, pitch shift etc.
– All knobs can be mapped to MIDI controllers with a simple “learn” function.
– Ensemble with adjustable amount and mix. Stereo delays.
– Full polyphony. Only your CPU sets the limit or you may set a fixed voice limit.

Version 1.0 has been released as a VSTi for Windows. We are working on an AudioUnit version for Mac OS X (Universal Binary). Price is $99, including the three soundpacks.

A demo version can be downloaded.