This is the third plugin in the series of hybrid synthesizers which combine a set of samples/waveforms with synthesizer functions and an effect section. 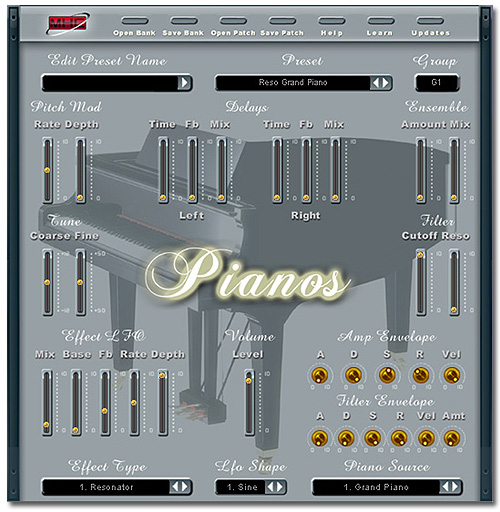 The piano plug-in includes 1024 piano presets and the user may edit the synthesizer- and effect parameters to create his or her own piano sounds.

Main features are:
– 1024 presets, which are available in three soundpacks (included when purchasing the plug-in). A soundpack is an expansion which adds new piano waveforms and a set of presets.
– Hundreds of piano waveforms/samples.
– Supports sustain pedal (and other MIDI controllers).
– Crossfading and layered effects include distortion, filter banks, a resonator, flanger, sub oscillation, amp modulation, pitch shift etc.
– All knobs can be mapped to MIDI controllers with a simple “learn” function.
– Ensemble with adjustable amount and mix. Stereo delays.
– Full polyphony. Only your CPU sets the limit or you may set a fixed voice limit.
– Manual (PDF)

Price is $99, including the three soundpacks.