Rayzoon is pleased to announce the release of update 1.71 for its virtual drummer VSTi Jamstix. Rayzoons ground-breaking virtual drummer VSTi runs synchronized with your sequencer and jams with your MIDI play (or even audio in signal) using its innovative free jam mode where rhythms are created on the fly. It also offers jamming based on an extensive rhythm library as well as creating professional drum tracks complete with intro, fills and ending with its easy to use built in arranger. 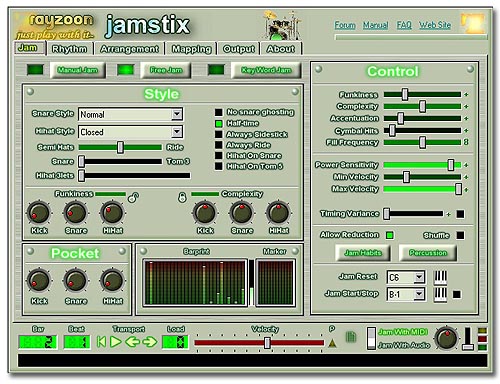 This update implements the following enhancements and fixes:
* modified interpolation to reduce CPU usage, especially in projects with higher samplerates
* Jamstix now saves the data received from the host during loading immediately to disk as ‘last_arrangement.dat’ in the Jamstix folder. This file can be loaded manually via ‘Load Arrangement’ under the disk icon of the arranger. The function is useful to recover an arrangement from an unloadable/partially corrupted host project file
* added new ini option ‘DefaultFillHatMode’ to control how Jamstix handles hats in fills:
o DefaultFillHatMode=0 – Jamstix randomly assigns a hat mode to each fill (default)
o DefaultFillHatMode=1 – HiHats are off during the fill
o DefaultFillHatMode=2 – HiHats switch to half-open during the fill
o DefaultFillHatMode=3 – HiHats continue to play as the rhythm states during the fill
* clicking on the label ‘Mapping’ in the mapping tab will now write a MIDI drum map text file for use as a reference
* fixed problem with output routing resetting to one output for a sound group when reloading a saved project with multiple outputs used within a sound group
* fixed problem with MIDI output recording in some hosts (i.e. REAPER)
* fixed changing funkiness or complexity while looping in audio free jam not having any effect