Rob Papen has just released another update for Blue. Blue is a synth that delivers FM Synthesis, Phase Distortion Synthesis, Wave Shaping Synthesis and Subtractive Synthesis is one creative combination. 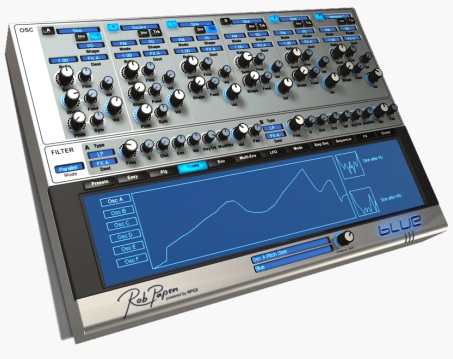 BLUE has six oscillators which can be connected in various ways, two analogue style modelled stereo filters, an enormous range of processing and modulation options, sequencer and an incredibly powerful arpeggiator, all brought together with the inspirational Rob Papen presets covering a wide range of musical styles.

-Tempo changes while using BLUE FX (Delays):
Rob added a kind of smoothing to avoid “crackles” if you use tempo changes in your sequencer and use one of the BLUE delay FX. Still you hear (with big abrupt changes) a kind of pitch glide like the traditional hardware delays do, but that is hard to avoid because the time of the delay does change.

-Bug fixes:
We did fix also a few smaller bugs.

The focus is ambient presets of which TC (Tim Conrardy) and Rsmus7 are well-known for. But Rsmus7 added also very edge arpeggiator, sequence, fx and synth sounds.