Tascam has updated Giga Virtual Instrument to v3.51. GVI is a 16-part multitimbral sampler with unlimited polyphony performance and the ability to run multiple instances – limited only by the power of your computer. GVI takes advantage of the latest Giga technology, like 96kHz/24-bit sample support, iMIDI rules for realistic phrasing and embedded GigaPulse technology for instrument resonance and ambience. 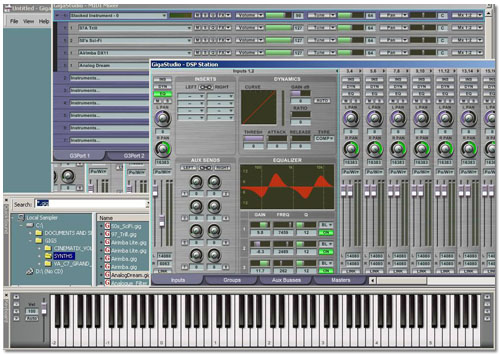 Improvements:
* GVI now supports multiple instances on multi-processor (dual core) computers for Steinberg’s Cubase, Steinberg’s Nuendo and Digidesign’s Pro Tools.
* GVI now includes a per instance memory usage meter when hosted in a VST or RTAS DAW application.
* GVI now supports access to instrument help documentation, when provided with a soundware library. This is accessed from the MIDI channel pulldown menu in the MIDI Mixer where the instrument is loaded. If no help file is present, this menu item will not be displayed.
* GVI now includes a link to the product registration web page under the Help menu. Registration gains the user access to informative newsletters, special deals & promotions and freebies.
* The Loaded Instrument Viewer can be brought up by either selecting “Loaded Instruments” from a MIDI Mixer channel pulldown or by pressing the Instrument Viewer toolbar icon. Once open, instruments can be loaded onto any MIDI channel by drag & drop.
* NFX: GVI now includes all four original NFX effect algorithms from GigaStudio. These effects can be applied to any loaded instrument via a flexible new FX buss insert architecture. These effects are: Chorus, EQ, Delay and Reverb.

* An incompatibility with Sony’s Acid 6 that caused no audio output from GVI when hosted in Acid 6 has been corrected.
* Rare instances of GVI crashing when exporting to GSI have been addressed.
* Previously, when running in standalone mode, it was not possible to change output channel selections after the sampler had been reset. This has been fixed.
* The filter Turbo Mode in the Quick Edit section of GVI is specific to the low-pass filter. Previously, it was possible for the UI to present Turbo Mode enabled with a different filter selected. Now, when Turbo Mode is enabled, the filter type is switched to low-pass automatically.
* The list of recently used files has been moved to below the list of factory content.
* Previously, using the Load menu to load a GSI file onto a MIDI channel was incorrectly performing a stack operation. This has been fixed in 3.51.
* The FX button in the MIDI Mixer has been renamed to GP. When illuminated, this indicates that a GigaPulse encoded instrument has been loaded on that channel. The associated pull down menu allows access to that GigaPulse UI. It is still possible to access the GigaPulse UI for an encoded instrument via the GigaPulse toolbar icon when that instrument’s MIDI channel is selected in the MIDI Mixer.