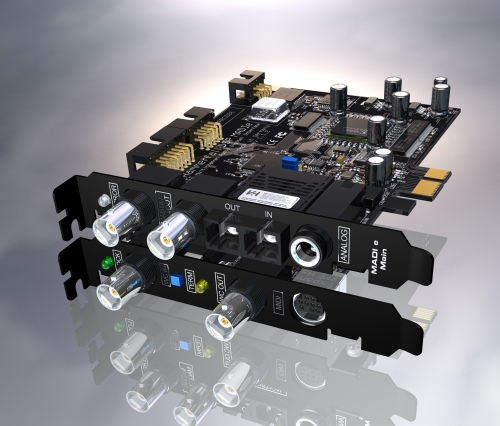 The HDSPe PCI Card is a short length PCIe x1 card that provides RME´s own high-speed serial audio data bus, as used in the Multiface, Multiface II, Digiface and RPM. These systems are owned and used by ten thousands of audio professionals around the planet. If users are looking for a no-compromise high-speed audio solution combined with ultimate compatibility, these devices are still state of the art. The Multiface II and Digiface solutions combine some of the highest possible audio transmission rates and low-latency features you can realize with card-based interface techniques, faster than most serial solutions; combined with flexible connectivity. Artists and studios all over the world rely on these combinations. With the HDSPe PCI Card the further use of the existing range of RME´s I/O boxes in next generation computers is secured. As a special addition, the new HDSP PCIe series is prepared to support the use of the TCO, RME’s Time Code Option, with Multiface/II and Digiface.

The HDSPe MADI card rounds up RME´s Premium Line MADI products as it is now the interfacing flagship to the MADI world. The HDSPe MADI card offers a powerful 128 I/O-channel computer connection. It supports 56- and 64-channel modes as well as Single and Double Wire formats. All 64 inputs and 64 playback channels can be routed and mixed independently to 64 physical outputs. The HDSPe MADI turns every “state of the art” computer into a powerful DAW (Digital Audio Workstation). The HDSPe MADI offers the most powerful router/mixer