TC-Helicon announces that a plugin version of its realistic multi voice doubling and detuning processor, VoiceDoubler, will soon be available for the PowerCore and Pro ToolsHD platforms. 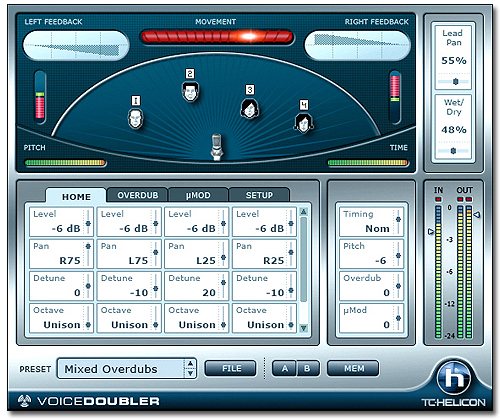 A direct port of TC-Helicon’s respected rackmount front of house effects processor, the plug-in’s algorithms create up to four humanized overdubs in real time as well as classic doubling effects. VoiceDoubler will ship in Spring 2007 and will retail at EUR 599 excl. VAT for PowerCore and Eur 799 excl. VAT for Pro Tools|HD. VoiceDoubler can recreate every conceivable doubling sound, including natural overdubs and pristine emulations of classic detune, microshift and chorus effects. Using humanization technology straight from TC-Helicon’s flagship processor, VoicePro, “tight and intimate” or “loose and lively” multitracked overdubbed sounds can be created live. VoiceDoubler for TDM and PowerCore features automatic latency compensation, and the humanization of timing in the doubling voices makes for realistic real-time overdubs.

According to Kevin Alexander, CEO of TC-Helicon,” If you survey the music industry’s popular music charts you realize over half the music uses doubling, overdub and detune effects on vocals. The process of creating these sounds is very time consuming. That’s why we created VoiceDoubler — to allow a producer or engineer to create those sounds in real time after the singer has left the studio.” VoiceDoubler PowerCore/TDM from TC-Helicon can be used for a wide range of vocal work. Doubling a chorus hook, an important lyric, or any other song section can now be done instantly without the tedium of matching performances and multitracking a human singer. VoiceDoubler transcends mere detuned and delayed track copies by manipulating time and pitch in your choice of fine or large increments so that everything from a mono lead + double to huge stereo lead + four doubles sounds natural and professional.