Pushing the limits of what an audio interface could be, TASCAM has launched the FireOne – a FireWire Audio Interface with shortcut keys and a weighted jog wheel to inspire creative interaction with the artists music. 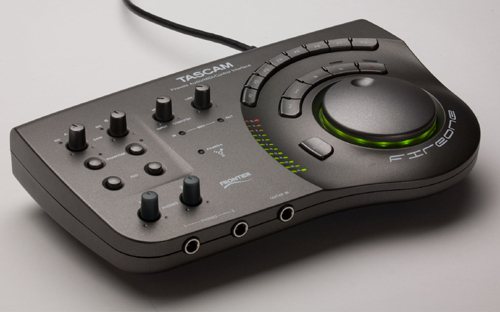 The most unique feature of the unit is its large, weighted, backlit jog wheel, which allows musicians to zip through their song while the backlight provides useful feedback such as a visual metronome. But aside from the shortcut controls, the FireOne is the first stereo audio interface in its class that records two mic ins and two outs over FireWire at 192kHz/24-bit audio resolution.

“With its sleek design and high resolution recording, the new FireOne is the most exciting TASCAM FireWire interface ever,” says Johnny DeLeon, Computer Products Channel Manager for TASCAM. “The new FireOne delivers unprecedented performance features and mobility in an incredible compact design.”

The FireOne features a pair of mic inputs with phantom power, pad and line switches. A guitar input switch for recording direct and MIDI input and output are also provided. It’s the first FireWire interface in its class to record and play at up to 192kHz/24-bit resolution. In addition to its weighted & backlit jog wheel, the FireOne has transport keys and nine programmable shortcut keys to control functions in audio applications like Logic Pro, SONAR, Cubase, Nuendo, Digital Performer, Live and Pro Tools. The edit control interface makes it a perfect choice for video editing applications like Final Cut Pro and Premiere.