Apple today unveiled a new Mac Pro line with up to 12 processing cores and up to 50 percent greater performance than the previous generation. Featuring the latest quad-core and 6-core Intel Xeon processors, all-new ATI graphics and the option for up to four 512GB solid state drives (SSD), the new Mac Pro continues to deliver amazing performance and expandability for the most demanding consumers and professionals. 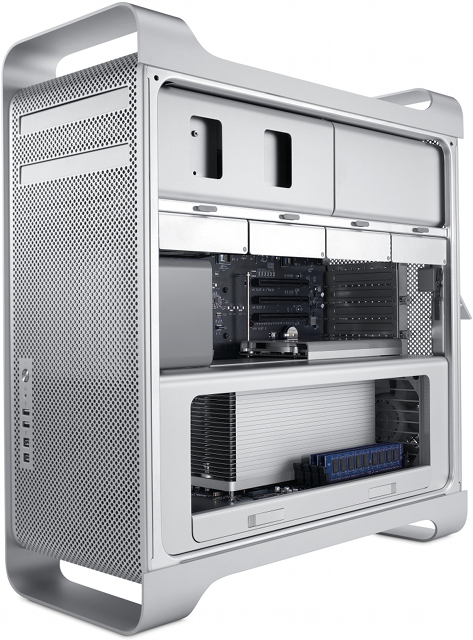 “The new Mac Pro is the most powerful and configurable Mac we’ve ever made,” said Philip Schiller, Apple’s senior vice president of Worldwide Product Marketing. “With up to 12 cores, the new Mac Pro outperforms our previous top-of-the-line system by up to 50 percent, and with over a billion possible configurations, our customers can create exactly the system they want.”

At the heart of the new Mac Pro’s performance are next generation quad-core and 6-core Intel Xeon processors running at speeds up to 3.33 GHz. These multi-core processors use a single die design so each core can share up to 12MB L3 cache to improve efficiency while increasing processing speed. These systems feature an integrated memory controller for faster memory bandwidth and reduced memory latency; Turbo Boost to dynamically boost processor speeds up to 3.6 GHz; and Hyper-Threading to create up to 24 virtual cores. The Mac Pro now comes with the ATI Radeon HD 5770 graphics processor with 1GB of memory and customers can configure-to-order the even faster ATI Radeon HD 5870 with 1GB of memory.

For the first time, Mac Pro customers have the option to order a 512GB SSD for the ultimate in reliability and lightning fast performance. With the ability to install up to four SSD drives in the system’s internal drive bays, the new Mac Pro can provide ultra high-speed disk bandwidth and random disk performance, two times faster than the average performance of a standard disk drive.** Mac Pro also now features two Mini DisplayPorts and one dual-link DVI port. The additional Mini DisplayPort output allows customers to connect two LED Cinema Displays without an additional graphics card or adapter and the dual-link DVI port supports legacy DVI-based displays up to a resolution of 2560 x 1600 pixels.

Every Mac Pro comes with Apple’s innovative Magic Mouse and customers can also order Apple’s new Magic Trackpad as an option. The Magic Trackpad brings the intuitive Multi-Touch™ gestures of Mac notebook trackpads to the desktop. With its glass surface, the wireless Magic Trackpad allows users to scroll smoothly up and down a page with inertial scrolling, pinch to zoom in and out, rotate an image with their fingertips and swipe three fingers to flip through a collection of web pages or photos. The Magic Trackpad can be configured to support single button or two button commands and supports tap-to-click as well as a physical click. Magic Trackpad is available separately for $69.

Continuing Apple’s commitment to the environment, Apple’s desktop lineup is a leader in green design. The Mac Pro meets stringent Energy Star 5.0 requirements and achieves EPEAT Gold status.*** The Mac Pro enclosure is made of highly recyclable aluminum and the interior is designed to be more material-efficient. The Mac Pro uses PVC-free internal cables and components and contains no brominated flame retardants. The new Apple Battery Charger provides convenient and environmentally friendly way to always have a fresh set of batteries for your Magic Trackpad, Magic Mouse and Wireless Keyboard. The Apple Battery Charger is available as an option for $29 and comes with six long shelf life rechargeable batteries.

Every Mac also comes with Mac OS® X Snow Leopard®, the world’s most advanced operating system, and iLife®, Apple’s innovative suite of applications for managing photos, making movies and creating and learning to play music. Snow Leopard builds on a decade of OS X innovation and success with hundreds of refinements, core technologies and out of the box support for Microsoft Exchange. iLife features iPhoto®, with breakthrough ways to organize and manage your photos by who appears in them and where they were taken; iMovie® with powerful easy-to-use features such as Precision Editor, video stabilization and advanced drag and drop; and GarageBand® which offers a whole new way to help you learn to play piano and guitar.

The new Mac Pro will be available in August through the Apple Store, Apple’s retail stores and Apple Authorized Resellers.