Built for DP
Built specifically for use with Digital Performer (Version 7.2 or later), DP Control gives users easy access to the most important transport and mixer functions for tracking, mixing, and live performance.

One-handed operation
Designed with large, touch-friendly buttons and other UI elements, DP Control works in both landscape and portrait orientations. In portait mode, users can hold their iPhone or iPod in one hand, and comfortably operate DP Control by pressing buttons and swiping to new pages with their thumb. 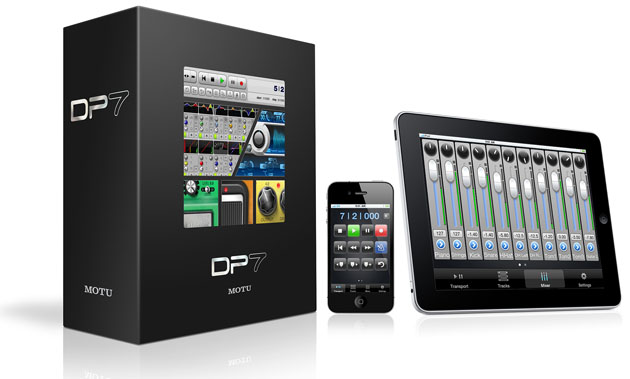 Multi-touch mixing
Wireless, multi-touch mixing with Digital Performer is now a reality. Users can operate multiple on-screen Mixing Board faders simultaneously with several fingers. For two-handed mixing, users can turn their iPad sideways and mix with fingers from both hands at once. Faders and other controls are large and easy to grab. Users can quickly swipe left and right to access more faders as they mix.

Bidirectional communication
If users make a change from DP Control on their remote device, such as renaming a take or adding a marker, the corresponding DP project on the host Mac is immediately updated, and vice versa. This two-way communication makes DP Control a seamless extension of DP.

— Real two-way communication: changes made in DP Control are immediately reflected in DP, and vice versa.

— Infinite undo, with the ability to step through the next and previous tasks in the host DP project undo history.

— New Take, Previous Take, and Next Take functions that operate on all of the record-enabled tracks at once (essential for tracking drums).

— Save function for saving changes made to the DP document.

Availability
DP Control is now available as a free download from the Apple App store. It is compatible with any iPhone, iPad, and third-generation iPod Touch, and it requires Digital Performer 7.2 or later running on a Mac on the same WiFi network as DP Control.