From the Native instruments User Forum: Today we are happy to announce the next version of Reaktor, and make it available to you as a public beta version at the same time: Reaktor 5.5. 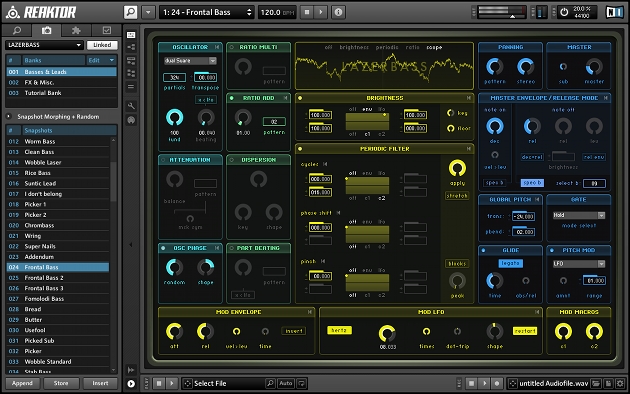 Version 5.5 will be a free update, and it is based on many improvements that we have made to Reaktor recently. It also has significant new synthesis capabilities that can literally take a lifetime to explore – both conceptually as a builder, and sonically as a sound designer and musician.

It has been quite a long while since we have released the last “big” update of Reaktor, but it has always remained a very central part of the NI instrument range. Last year it was the platform for some very well-received and successful instruments: the Spiral sequencer by Lazyfish, my own Spark synthesizer and Tim Exile’s “Finger”. The new Reaktor version will be the basis for even more of these instrument releases from us in the future.

If you have a look at the attached screenshot of Reaktor 5.5, you will see that the user interface of Reaktor has received a major facelift. The new version not only looks “modern” again, the new single-window interface with its different split views and many GUI optimizations also improves the handling in many areas.

The screenshot also displays Mike Daliot’s new “Lazerbass” additive synth that is a new addition to the factory library in 5.5. This instrument is based on the new “Sine Bank” module. The sound quality of the additive synthesis in Reaktor 5.5 is quite outstanding, as you will see from extremely detailled, brilliant, aliasing-free sounds that Lazerbass can generate.

The “Modal Bank” module is another major addition in the Reaktor 5.5 arsenal. Modal synthesis can produce a wide range of complex, organic timbres with tremendous depth and dynamic range, especially in the physical-modelling domain. The Modal Bank is also the basis for a new synthesizer that I am currently working on, which we will release in the near future as a separate instrument, but also as an ensemble for use in Reaktor 5.5.

In Reaktor 5.5 we have also improved various crucial areas like the snapshot management, the way how send/receive modules work, and the auto-save function in plugin mode. Also, ensembles and instruments are now interchangeable in how they can be loaded into Reaktor.

Some of the most important improvements in Reaktor 5.5 are “under the surface”, more than 30% of the code is new. The new version is based on our latest GUI and audio bridge frameworks, so it has a more flexible and robust technological basis. This also brings advantages like a full-screen GUI mode, higher quality of sample rate conversion, and up to 40 audio channels in standalone mode.

Another important focus for Reaktor 5.5 for us was the documentation. The “application reference” manual has been completely rewritten, and it now also includes a lot of tutorial-style parts. We are also working on a similar new version of the “module reference” manual that will be made available together with the next upcoming Reaktor update that will bring full 64bit compatibility.

You can find a detailed list of the improvements in the 5.5 version here.