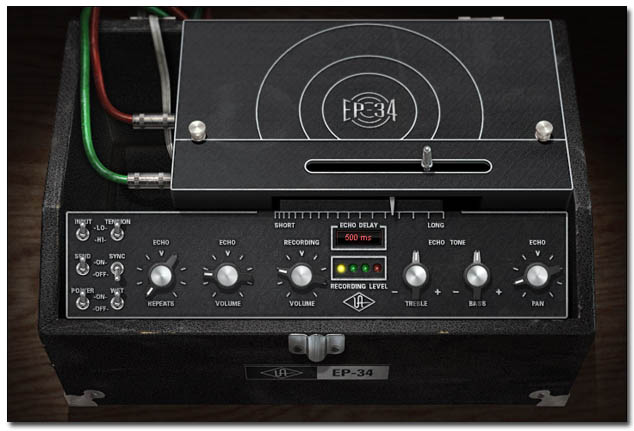 Unlike other Echoplex emulations, the EP-34 is the first plug-in that targets specific behaviors of both the EP-3 and EP-4 Echoplexes. The DSP experts at UA sweated every last detail, ensuring that the EP-34 plug-in is verifiably the most accurate model for those who want the distinct, chaotic Echoplex sound, “warts and all.”

“The rich tape echo sounds and tactile controls of the original EP-3 and EP-4 hardware units have been cherished by musicians and engineers alike for decades,” enthused Matt Ward, President of Universal Audio. “We’re elated to be the first to provide the dead-on sonic qualities and controls from both of these classic units as a software emulation.”

The EP-34 Tape Echo plug-in is available as part of the new UAD Software v5.7.0 release. In addition to the EP-34 Tape Echo, v5.7.0 includes the now officially licensed dbx® 160 Compressor/Limiter plug-in, as well as additional performance enhancements for all UAD-2 users on the Windows platform. UAD Software v5.7.0 is available as a FREE download for Mac and PC users worldwide.