From mixer to instrument – At first look, the DJM-2000 looks like a small SVM-1000, (also equipped with a touchscreen), but it really isn’t a small SVM. The DJM-2000 is the missing link in a booth with CDJ-2000’s. Because you can connect the DJM-2000 with the CDJ’s through the PRODJ protocol, these devices will function as one. Almost anything becomes possible. 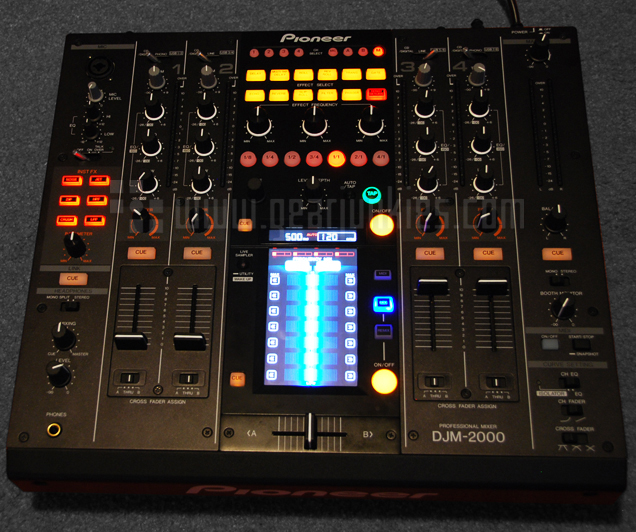 Automatic player ID assignment
Back in the days, you always had to tell the CDJ, which player it was, (1 through 4). With the DJM-2000, there is no need for this. You can just connect a regular RJ-45 (Ethernet) cable from the CDJ to one of the four ports at the back of the DJM, depending on which port you connect your CDJ to, that will be the player ID. If needed this option can be turned off.

Integration with Rekordbox
By connecting your computer to the PC port at the back of the DJM with an ethernet cable, you can browse your tracks inside Rekordbox from your CDJ’s. Also, it’s possible to drag tracks to the CDJ from your laptop. When you connect to your DJM there will appear some icons at the bottom of Rekordbox which will represent your CDJ’s and DJM. So, when you drag a song to your second CDJ, that song will load on the CDJ which, at that moment, has player ID 2.

On-Air
When you connect your CDJ’s to the DJM using the PRODJ protocol you can see exactly which CDJ is “on-air”. The ring around the CDJ’s jog wheel will light up red when it is “hearable“. Pioneer has really thought this feature through, because it reacts on everything, not only the fader. If you close the trim or the master, the jog wheel turns white again. Very nice feature!

Audio Interface
The DJM-2000 now features an 8 channel, built-in, audio interface which you can use by connecting the DJM-2000 through USB with your computer. You can choose three options. Use the DJM as an 8 channel, 16 bit output (4 stereo channels). If you want to have an input then you can choose for option 2, which will give you a 2-channel input and 6-channel output (also at 16 bits). When you need more quality, you can choose for the third and final option, which will give you 6 outputs at 24 bits. Reason that you cannot use 8 channels at 24 bits is probably because the bandwith of USB isn’t high enough.

Effects
The DJM-2000 is packed with effects. Globally, you can see it as three effect sections. The instrument effects, the normal effects and the sidechain effects. 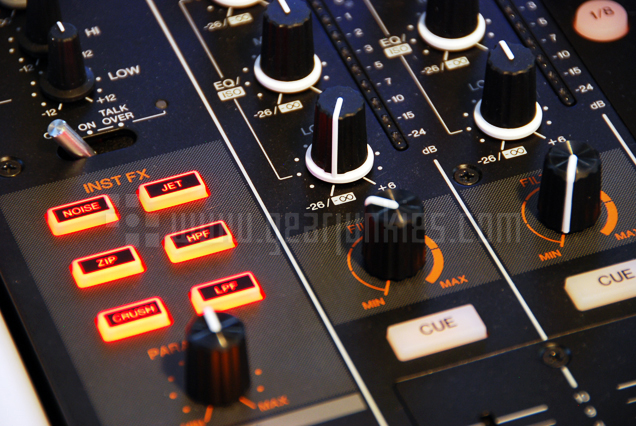 The Instrument effects look a lot like the Color FX which we know from the DJM-800. The difference is that they are more extensive on the DJM-2000. There are six effects instead of four and most effects of the DJM-800 are eliminated or have been  changed, the filter has been split into an high and low pass filter. The rest of the effects are Jet, Zip, Crush and White Noise. That last one is very cool! You can generate white noise and use a band pass filter on it, so you can make a beautiful uplifting build-up sound with it.

Then the second effect section, which is positioned at the top in the middle of the mixer. When I first saw that, it reminded me of an built-in EFX. But it isn’t! Look at it as an extended version of the effect section on the DJM-800, with an effect never used by Pioneer called Slip Roll. This is almost identical as the roll feature, the difference being that the roll is sampled again when you change the signature. The normal roll is only cut or extended.

Pioneer has changed to rotary’s instead of buttons to choose an effect/channel, which works much directer. Also, this effect section has got a three band ISOLATER EQ. With this Equalizer you can choose which part of the sound is send through the effects. You can choose for example to only use a delay on the high end of the high hats. DJ’s now have a lot more effects options then before.

Display
The display looks like the heart of the mixer, but it isn’t. Personally I look at it more as an addition, from which you can control some great things. Like sidechain effects, muliband crossfades, midi, a sampler and a small utility (to set your display clarity for example). 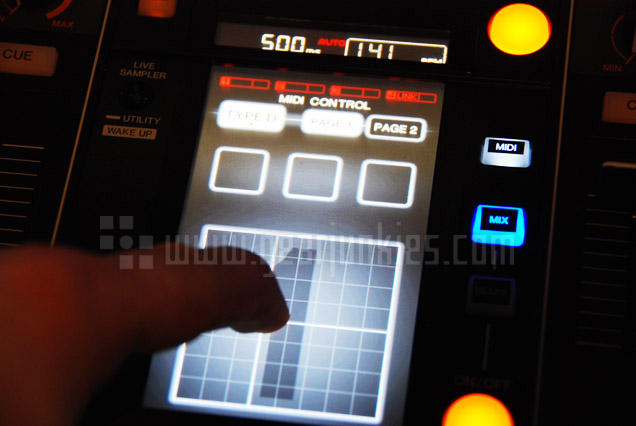 Effects
First of all, the effects (previously mentioned as sidechain effects). But what is sidechaining exactly? With sidechaining you use a signal to trigger an effect on an other signal. In this case the effect is some sort of gate and the signal is an oscillator. The parameters of the oscillator can be changed by using the touchpad. Very cool to play with, but I don’t know if it is going to be useful, because these are some really strange effects. Working with them I had my doubts. 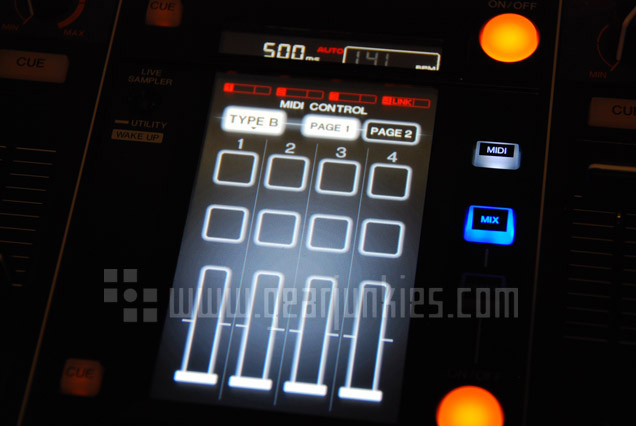 Then the second part, the multiband crossfader, as I call it. Normally, a DJ mixer has a crossfader which controls the whole frequency spectrum. The DJM-2000 has also the option to do this with seven crossfaders! Each fader has its own frequency range. You can make some really cool crossovers with this!

MIDI
The third feature of the display is MIDI. Just like the DJM-800, the DJM-2000 is fully midi assignable, and with fully, they really mean fully at Pioneer. You can even assign the touchpad. For this, there are some (display) pages with buttons, “faders” and X/Y pads.

Sampler
The DJM-2000 is also equipped with a sampler. With this new feature you can sample eight seconds (from a selectable source, so also a microphone). Load that sample in the CDJ and then do the most crazy things with it. Basically you could even remix stuff your MC is saying.

Link Cue
One of the features I thought was really cool, is the Link Cue feature. With this feature you can listen to tracks from Rekordbox in your headphone. The advantage of this is that you don’t have to load a track in a deck to know how it sounds again. This function won’t work directly, you need to enable it first in the Rekordbox preferences. 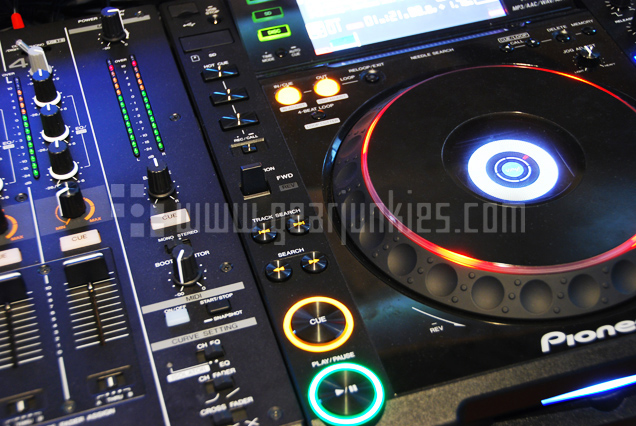 Conclusion
Pioneer have made the perfect device for the missing link between the CDJ’s and the rest of the gear. This DJM is packed with so many features that anyone can use/create their own style on it. I don’t think that somebody would miss anything on this mixer. The mixer feels very solid, like a DJM should feel. This mixer is definitely ready for the future, also because I can imagine that in about five years most DJ’s will use ethernet cables to connect their decks with. So connectivity will become a major part in any DJ set up.

Despite the fact I never was a big Pioneer fan, this DJM-2000 completely converted me into a … believer! I like this mixer very much!

The Gearjunkies Team thanks Jeroen Groenendijk – PIONEER BENELUX BV for the review unit. In part two of this review we show you a visual overview of what this incredible machine can do!