Wusik EVE V3 has been released for both Windows (VST) and MAC (VST/AU), plus, both Full and Demo versions  now come with a complete library of sounds. The new Xenos Soundworks and the old Famous Keys sets 1, 2, 3 and 4. (LoFi Retro Sounds). And Wusik will keep bundling the Mellotronix, Zvon and the DBear Genesis sets, (each set has its own ZIP file). 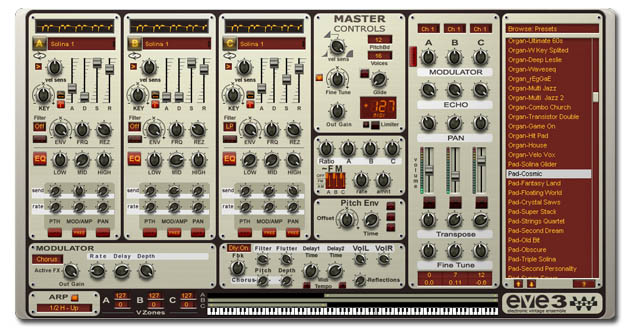 EVE stands for Electronic Vintage Ensemble, which suggests the design philosophy behind the instrument. EVE was made to recreate in the virtual world of softsynths the exciting and immediate experience of the early age of electronics in pop, rock and jazz music from the 1960’s and 1970’s.

During this creative period in music history, many musicians started to employ the innovative sounds of the ‘electric keyboards’ which were newly available for use on stage and in the studio: Rhodes electric pianos, Hammond and Vox organs, Hohner clavinets, strings machines such as the Arp Solina string ensemble, Moog synthesizers, and all those that are now considered ‘classics’.

It was not only keyboards that were a part of this revolution in popular music: the use of effects and recording techniques for layering, blending and manipulating sounds transformed the way music was produced and conceptualized. Tape based delay lines, rotating speaker cabinets, guitar distortion pedals, wah wah, phasing, flanging and other effects became an integral part of the process of sound design.

The upgrade is only $ 39.95 USD for all previous users. You can also participate on the current Group-Buy where you will receive Wusik EVE V3 Full and other extras.