Fender, the name synonymous with rock ‘n’ roll, brings you the world’s first electric guitar that is also an officially licensed Rock Band 3 video game controller. Blending state-of-the-art gaming and guitar technology with the authenticity of Fender design and engineering, the Squier by Fender Stratocaster Guitar and Controller is created for musicians and gamers alike and rocks both worlds—whether plugged into a guitar amp or into a video game console. 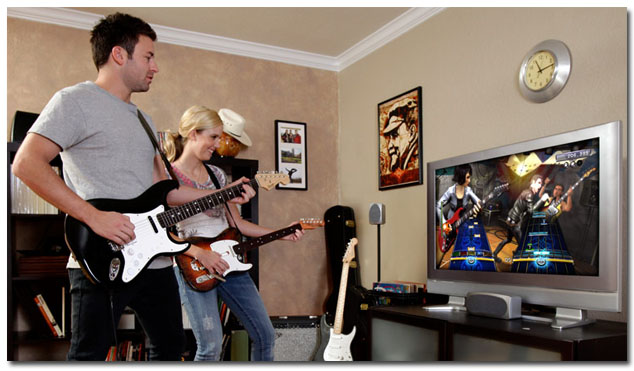 Rock Your Living Room Stage
Designed for the Rock Band™3 Pro mode, the Squier by Fender Stratocaster Guitar and Controller elevates the gaming experience to the level of real music making by letting you play the actual notes and chords of your favorite songs while racking up high gameplay scores. Its position-sensing fingerboard responds to the touch, turning gameplay into real musical performances.

Fret Sensors
The Squier by Fender Stratocaster Guitar and Controller features sensors located in each fret on the fingerboard, allowing direct on-screen feedback indicating the player’s finger position when using the instrument as a Rock Band 3 controller and in the game’s guitar-training tutorials. In combination with the custom-designed pickup, this cutting-edge technology actually shows players when they’re hitting correct and incorrect notes when learning guitar parts, thus aiding in their development and improvement as real guitarists.