Dave Smith Instruments today introduced Tempest, a new analog drum machine, at the 2011 NAMM Show. Tempest is a collaboration between Smith and longtime friend and fellow instrument designer Roger Linn. Though they’ve consulted with each other on past projects, Tempest marks the first time a product will carry both the Dave Smith Instruments and Roger Linn Design logos. “If you’re going to make a drum machine, who better to have in your corner than Roger Linn?” said Smith, referring to Linn’s legacy as inventor of the digital drum machine. 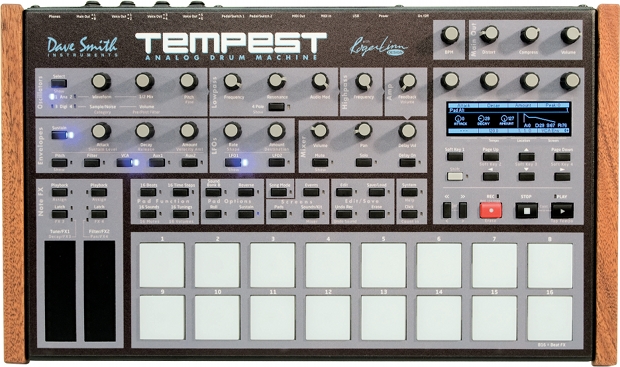 Tempest’s 16 velocity- and pressure-sensitive pads are arranged in an 8 x 2 array to facilitate both real-time and step entry of beats. Two pressure- and position-sensitive Note FX slide controllers provide a unique new method of performance and control.

“We’re very excited about Tempest,” said Smith. “It’s an instrument with a lot of personality and it’s great fun to play. It has been a long time since there has been anything new in the drum machine world.”