HG Fortune, being somewhat of an alternative instrument plug-in designer, created something which is hard to describe. It made me think in lines of the Korg Wavestation or NI Absynth but at a more low-level way of usage and programming. Very much suited for drones, pads and soundscapes.

Synthesis
Base are 4 samples (Soundfont arranged 2×2) which can be mixed in XY-pad (similar to vector synthesis). In addition there are double mystify ‘smearing’ the sound and grain processor. There is one filter, two ADSR’s, seven LFO’s, one S&H LFO, 16-step modulator. Effects are delay and reverb.

The layout of all these components at first can be a bit overpowering but when you are used to it you will noticed that its relatively easy to program and use. With this low of a threshold it’s easy to take a preset and start to alter settings and create new exciting sounds really fast. 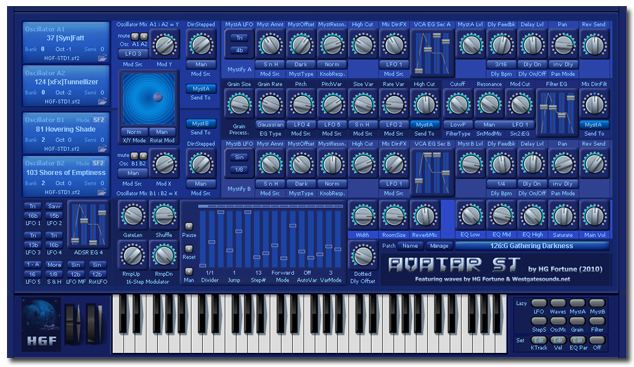 Sound
Sound wise the majority of the presets are in fact drones and pad like sounds. But this is where this instrument excels at. Also contrary to its competitors the sound of this instrument doesn’t sound sterile or analytical. It’s more close to a older hardware version which has the imperfections which gives it its charm. It has this crude digital grainy sound almost drowning in reverb. Hence why I compared it to the Wavestation. Because it sounds more like a Wavestation than the Korg Wavestation plug-in to me.

Because of being able to load soundfonts there are infinite possibilities to extend the sounds of this instrument. Not because it’s a glorified sample player but because the samples are just the start.

Even though its great at making drones pads and soundscapes it limits its use for musical styles somewhat. But as a relative cheap plug-in (39 Euro) it is very much suited for electronic music and soundtracks.