M-Audio, part of the AVID company, is a brand we all know from their MIDI controllers and keyboards and audio interfaces (amongst many more products). So it was a big surprise when M-Audio started teasing us with something that looked like a synthesizer. And, at this years NAMM, there it was, the 12-voice Venom VA synthesizer from M-Audio.Time to get it in the studio and try this baby out. 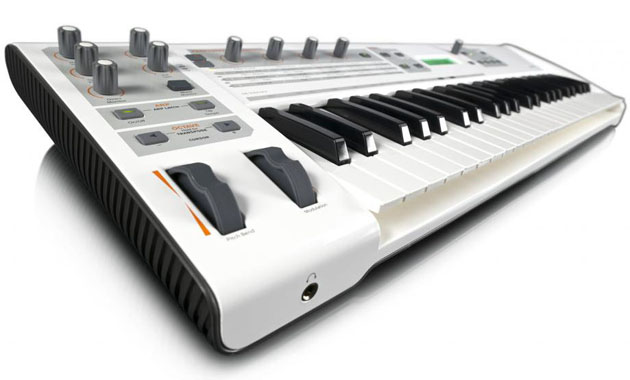 In Short
The Venom is a 49 full sized key synthesizer. It kinda resembles a classic analogue synth but combined with modern digital technology. Hence the description Virtual Analogue! Of course it has a pitch- and modulation wheel, lots of knops and buttons to tweak your sounds with and a small display.

Look and Feel
As I held the Venom in my hands for the first time I didn’t really know what to expect. It feels a bit ‘plastic’ and light. To be honest it doesn’t feel like a synth you can take with you when going on the road for a tour.

The buttons and knobs do feel solid. Which is the same for the pitchbender and modulation wheel. The display is too small for my liking, plus it looks a bit cheap. It reminded me of an old carstereo (matrix) display. I had problems reading it because of the matrix style and size of the display. It wasn’t a big problem because I actually didn’t need the display, but more on that later.

Sound of the Venom
You can simply scroll and browse through the banks with the presets. When browsing through the sounds of the Venom you can hear the diversity of this synthesizer. Basses, pads, leads, arpeggios, soundscapes, FX and lots more. First impression of the sounds is that they sound a bit thin, but after listening to them closer they aren’t that bad.

In total you’ll get four banks with 128 presets each (in single mode) and two banks with 128 patches each in multi-mode. For each sound there are inserts and master effects available to tweak the presets more. The effects are modulated, timebased and dynamic, so there are enough to choose from.

For each sound there are three oscilators available. There’s an built-in arpeggiator and you can program drums. These drumpatterns can be combined with sounds which means you can get some great grooves going.

As the Venom has a built in audio interface it has an audio IN. I have tried to get external audio routed to the filter or the arpeggio of the synth, but I didn’t succeed. This would be a great added feature of the Venom. Then it is not just a regular audio interface. I haven’t tried out the interface further, so I don’t know what the quality is, but knowing M-Audio and their experience in audio interfaces, there won’t be any issues there for sure.

Small Display, … problem or not?
Well, … yes and no. On stage I would definitely prefer a larger display. For programming sounds … not really. M-Audio has a great solution for this and that’s the free and quite extended VYZEX software editor. I could only test it out with my Mac as the installation under Windows Vista got completely screwed up when I had to install an update. I haven’t tried it under Windows 7. But on my Mac it worked flawless!

This editor works real time, so when you change a setting in the editor or on the Venom itself, the parameters are adapted and changed immediately, which works very nice. Especially if you work with DAWs like Cubase, Logic or Protools, beacuse this way your Venom almost becomes a VSTi, … well almost!

Conclusion
I enjoyed my time with the Venom, even if I was a bit sceptic at first. Anyone without real experience with synths will find the Venom a perfect synth to get started. It has everything you need: great controller, audio interface and VA synth in one package.

As I mentioned before the built-in audio interface is not really an added value, in my opinion. I would have preferred a better and larger display and a 61 keyboard, if it was up to me.

The retail price of the Venom is around 540 Euro. And I think that’s pretty steep for this synth. If we look at the competition like the Roland GAIA (580 Euro) and the, also new, Novation Ultranova (575 Euro) then the price is a bit high, as I would prefer these two synth slightly above the Venom. That said there is no denying that Roland and Novation have a bigger heritage when it comes to synthesizers. However, that’s a pre-assumption as we have to review both synths in the near future. So who knows?

Again, … I enjoyed myself with the Venom and this synth would be a good addition to any setup and even very good as that ‘first synth’ for starting producers.

We want to thank Roger Bisschops from Avid for the review model of the M-audio Venom.