Korg has teamed up with the hugely popular and globally successful virtual band Gorillaz to create a new dedicated beatbox for the iPad: The iELECTRIBE Gorillaz Edition. A limited run of 10,000 units released at a very special price of US$9.99. *Sales beyond 10,000 units are yet to be determined (as of April 18, 2011). 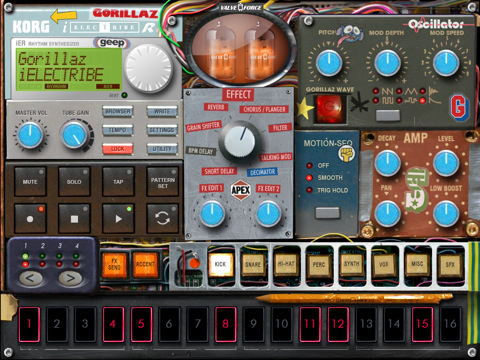 The iELECTRIBE is a virtual analog beatbox for the iPad; sound creation is easy, fun and intuitive – just as on a vintage analog synthesizer. Simply choose a part and touch the 16-step sequencer to quickly build a groove. The aggressive sound, unique functionality, and intuitive beat-building style of the iELECTRIBE made it a favorite of Gorillaz for their latest album “The Fall”.

While retaining the intuitive beat-making features of the iELECTRIBE, the special Gorillaz Edition is a new machine customized to generate Gorillaz samples from their fourth album “The Fall” which allow the user to create music in a wide variety of musical styles. The iELECTRIBE Gorillaz Edition features: a unique design and synthesizer engine including 128 new sounds created by Gorillaz; and 64 ready-to-use pre-programmed patterns by the sound team Gorillaz, Stephen Sedgwick, and Korg.