The Numark iDJ3 is a powerful DJ controller. However, ‘the what’s so special about this controller‘ issue you’ll see when you look at it for the first time. The controller has a docking station for an iPod/iPhone right in the middle. With your iPod/iPhone you can play music from the device or you can even record music. If we look further you’ll see two touch sensitive jogwheels, a 3-band EQ section with kill buttons, four auto-loop buttons and the usual play, cue, sync and stutter buttons. Between the two jogwheels you’ll get a mixer section with a crossfader, three line faders, deck A and B buttons and a navigation button for that iPod/iPhone device. 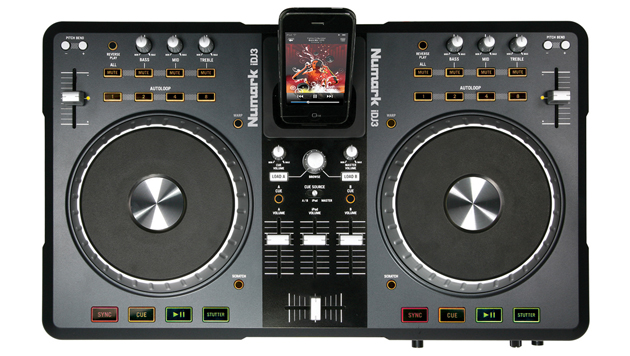 What do we get when we open the box?
Lots of booklets and manuals, but also the software. In this case you’ll get a copy of Virtual DJ. After I put the booklets aside, I could take out the iDJ3. The big jogwheels and the iPod/iPhone docking station are the first that you’ll notice. After setting up the iDJ3 with my computer, I could start spinning the wheels. The setup

and connection with my computer was easy and fast. The installation of the Virtual DJ software was without any problems. The software has a custom ‘skin’ for the iDJ3 controller.

The kill buttons work well and the respons is direct. Same thing for the touch sensitive jogwheels. One issue that is regrettable is the fact that you can’t control any effects. Too bad, but then again the use of your iPod/iPhone makes up for that I think. The function of the auto-loop buttons is almost the same as of the Pioneer CDJ800, and works pretty good. Triggering direct loops with 1, 2, 4, or 8 beats ‘on the fly’ is no problem. However I do miss a button or control to shorten the loop quickly.

Why is the iDJ3 special?
I really do like the fact that you can use your iPod/iPhone. This will come in very handy for doing requests during a gig for example. Especially if someone brought their own iPod of iPhone to the gig. Too bad that the channel for the iPod/iPhone doesn’t have a 3-band EQ or gain. A lack of a feature like this can cause painfull ears when prelistening to the tracks during browsing. The controller has a button for fast browsing and scrolling through your maps and playlists.

In Short
The Numark iDJ3 is a great controller for the DJ just starting out and who is looking for a good controller with the ‘extra’ edge, like the use of an iPod/iPhone. Because of this you’ll get an extra opportunity to alter your set during a gig, fast! Allthough I think that after a while the software and the lack of effects will become a kind of boring. A bonus is that with a different mapping the iDJ3 can be used with other software, so you still get a versatile DJ controller for a limited price.

Thanks to Numark for providing us with the review equipment.