Numark, the world’s leading manufacturer of DJ technology, introduces the MIXDECK QUAD, a professional-grade DJ controller and player with integrated effects, direct connection for iPad or iPod touch, and inputs for CD and USB flash drives. Numark will unveil the MIXDECK QUAD at Hall 5.1 Stand #B45 of the 2011 Musikmesse show from April 6-9 in Frankfurt, Germany. 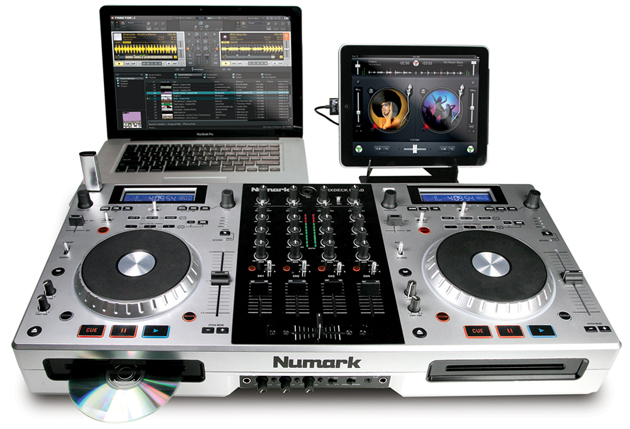 MIXDECK QUAD is a complete DJ system with 4-channel analog and MIDI mixer that puts DJs in complete control at any event. Thanks to the integrated four-channel mixer/controller, DJs can cue and layer to their heart’s content. MIXDECK QUAD enables DJs of all kinds to perform, mix, remix, and record with virtually any popular music media, including CDs, MP3 CDs, USB flash drives, DJ software on a laptop or iOS devices like the iPad and iPod touch. The flexibility to work with virtually any kind of media makes it perfect for use at clubs, parties, weddings or other events.

Based upon the popular MIXDECK controller, the MIXDECK QUAD delivers increased versatility by adding support for core MIDI on the iPad and iPod touch, opening the world of iOS Apps like Algoriddim’s DJAY to the DJ’s rig. MIXDECK QUAD also offers a fully functional four-channel digital/analog MIDI mixer, allowing simultaneous control of a connected iPad or iPod touch and a computer while mixing from CD, flash drives, mics, or external sources.

On top of playing all kinds of music media, each one of MIXDECK QUAD’s decks enables the DJ to further shape their performances with integrated, beat-synced DSP effects that include chop, echo, filter, flanger, pan, and phaser. Each is completely adjustable and a dedicated wet-dry fader controls them all.

MIXDECK QUAD contains a set of beat and pitch tools that will help DJs with beat matching and harmonic mixing. Start playing a track and MIXDECK QUAD automatically analyzes its BPM (tempo), and displays it on screen. There’s also a Tap tempo button for manual BPM entry. It’s easy to alter a track’s BPM by ±6, 12, 25, and 100% using the pitch fader. For each of those ranges, DJs can also engage Key Lock, which holds the pitch (key) of the track while the DJ independently manipulates its BPM. There’s also a set of pitch-bend buttons on each track.

DJs can play tracks from discs in single-track, continuous, and programmable playback modes for flexible performance. Fader Start enables MIXDECK QUAD to start playing the track that is cued up when the crossfader is moved so that effortless transitions made every time. DJs can also use Fader Start with compatible CD players connected to MIXDECK QUAD’s inputs.

“The MIXDECK QUAD is by far the most versatile and powerful tool we have designed to date,” said Chris Roman, Senior Product Manager, Numark. “This is the first time DJs can get one piece that plays all their media, controls their favorite software and also integrates smoothly to control and playback from their iPad or iPod for performances.”

The MIXDECK QUAD will be available Q3-2011 at MI and DJ retailers.