RME upgrades the award-winning Fireface UFX with a new and revolutionary feature: an integrated recorder for all inputs and outputs directly to USB memory devices with up to 2 TB. Live concerts, band rehearsals or spontaneous jam sessions can be directly recorded and played back from the medium – plugged into the front of the interface – even completely stand-alone without computer or software. All 60 input and output channels can be individually chosen for recording. 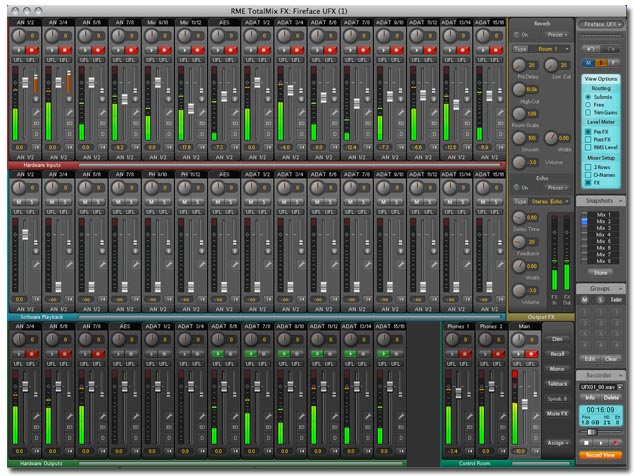 The new addition converts the Fireface UFX not only to a stand-alone field recorder, but also to a powerful multi­channel live player for previous recordings, e. g. for virtual sound checks.

The Fireface UFX records the pure input signals as well as the processed mixer outputs in any combination. The channels to be recorded can be selected directly at the unit or comfortably in TotalMix FX. Playback supports up to 30 channels, either into the UFX outputs or the TotalMix FX inputs, enabling a post-processing of the audio data with EQ, Dynamics and Echo/Reverb.

The UFX also plays back standard wav files that had been copied to the USB memory from a computer. For all this to work comfortably and safe the recorder can be operated directly at the unit via two easy to understand and easy to operate menu screens, with direct access from a front panel button. Additionally the recorder is now found in the TotalMix FX software user interface (Mac and Windows PC). From the mixer software all recorder settings and state displays are easily overviewed, files can be selected, and channels can be selected for record and playback function by simple mouse clicks.

A preview of the new UFX software is available for all customers on the RME forum (www.rme-audio.de/forum, section USB). This preview also adds mono (single) channel hardware outputs to the TotalMix mixer view and the channel menu of the unit. In the unit all stereo channels are now shown as such, making the stand-alone operation even more simple and quicker than before. The final version with all features will be released in May 2011.