TC Electronic adds dual radar display to the LM6 loudness radar meter algorithm for TC TouchMonitors with software version 1.11. Now loudness can look twice as good! With the optional LM6 algorithm installed, users can load two independent Radar meters simultaneously on their TC TouchMonitor TM7 or TM9. This opens a number of highly valuable configurations. For example, it is possible to let one Radar meter instance display a pre-processing signal while the other instance shows a post-processing signal – and best of all, both can be monitored at the same time for the ultimate audio overview. Another scenario could be having two Radar meters display both a stereo and a 5.1 signal simultaneously – or two stereo or two 5.1 signals, of course. Finally, both instances also provide 24 hour history for the audio being monitored. 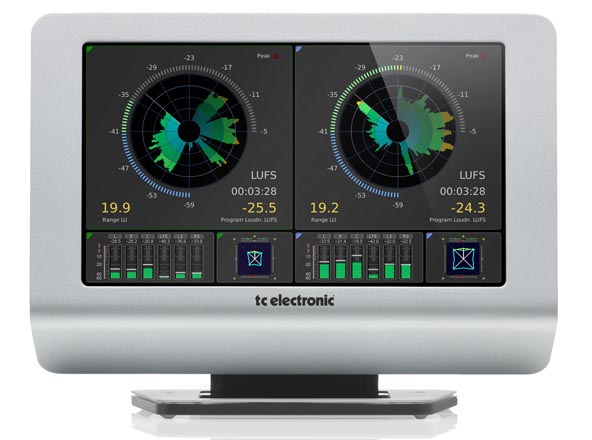 Other instruments have been updated as well – for example, it is now possible to run multiple instances of the Surround Sound Analyzer. Also, the on-screen help feature has been improved as has the general UI expeience with e.g. enhanced mouse sensitivity and new slider functions. Finally, the software release also features improvements with regard to general stability and performance.

For decades, TC Electronic has explored and pioneered the field of digital audio and loudness metering, offering state of the art tools for measuring, correcting and converting audio for a wide variety of applications. For instance, the amazing Radar Meter is available as a software plug-in (LM5D) for Pro Tools HD and TC Electronic’s award-winning System 6000 MKII platform, DB4 MKII and DB8 MKII broadcasting processors and the newly introduced LM2 rack based stereo loudness meter.

The TC TouchMonitor TM7 & TM9 is a full-featured stereo and multichannel loudness and true-peak level meter, which is perfect not only for broadcast ingest and transmission, but also for post, film and live production. To comply with a given international broadcasting standard, the numbers representing loudness are paramount, and these all-important digits are displayed instantly on the large color touch screen.

In short, TC Electronic is proud to continuously develop next generation loudness metering!