djDecks has finally reached v1.00. This release is based on the djDecks DX version that has been in beta for quite a while now, so this means that it will also play video and karaoke, allow video effects, text overlays and picture slide shows. Besides that, the browser, playlist, autoplay and search features have been improved, the audio engine is more flexible (allowing you to mix multiple asio/directsound/wasapi devices) and controller support has been improved too (besides midi, HID and OSC are now also supported). 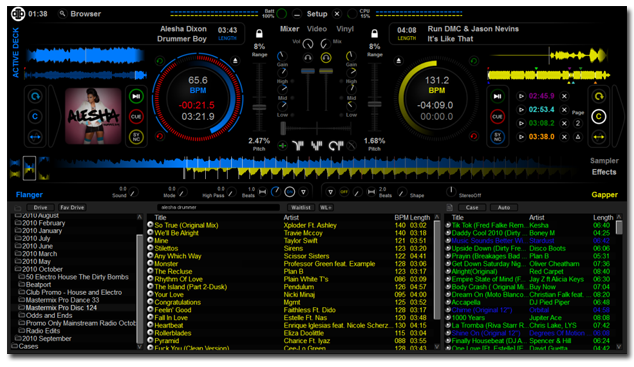 Features
Up to 4 full-featured decks are available for mixing, offering detailed waveforms, pitch ranges from 4% up to 100%, automatic bpm detection, looping, cue points and effects. The colored waveforms aid you in seeing what’s coming up, and the accurate cue points and beat-aligned loops will make your mixes easier. Pitch corrections are made inaudible by changing only the tempo but not the pitch, and even changing the position of a playing song sounds seamless because it’s beat-aligned.

djDecks can be used with an external mixer, sending each deck to a different output, or you can use the internal mixer which includes a three-band equalizer with adjustable frequencies, pre-listening options, and a limiter to ensure that your mix sounds clean all the time.

Also included are various effects such as an advanced echo, a flanger, bitcrusher, filter and gapper, but you can also use industry-standard VST plugins to add a unique touch. (2 VST effects can be loaded on each deck, and a VST effect can also be applied to the master output)

The browser allows you to browse your songs by reading their tags. You can fully customize the columns that are shown, quickly search any track in your library, create playlists and even create rule-based smart playlists. It can also show your album-art next to the songs.

djDecks is compatible with many midi controllers out of the box such as the Vestax VCI-100, Denon HC-4500, Hercules DJ Console, Numark Mixdeck, Pioneer CDJ-2000 and many others, but you can also create or customize your own mapping for your controller. MIDI, HID and OSC standards are supported to create your mappings.

If you want to have the feeling of mixing with vinyl, yet have the advantages of digital files, then you’ll definitely want to check out djDecks’ Vinyl Control. Using special vinyls that contain a special code, your music will follow the exact speed and location of the needle on the control record.

djDecks is compatible with most vinyls available such as Final Scratch, Serato Scratch Live, Traktor Scratch, Virtual DJ and MsPinky. It’s also possible to mix regular vinyl or other inputs such as mics with djDecks, and also use beat detection and effects. You can even record a piece and start scratching it using vinyl control instantly.

djDecks also supports recording your mix, or broadcasting it to a Shoutcast or Icecast server.

A recent addition to djDecks with the new DX release is the ability to play Video and Karaoke files.

The video mix can be shown on an external output, and various effects can be applied and transitions selected.

Another strength of djDecks is the way in which it can be fully customized. You can create very advanced controller mappings, but also completely change the way djDecks looks by installing or creating custom skins, and add new functionality by creating your own scripts.