Many, many years ago when we started Gearjunkies, we had to come up with a name. We wanted it to reflect the thought we had in our minds: the love for gear. Marc, Mark and myself (Eric) had a common love for electronic music but also the affection for the gear that made this music. That was when the name ‘Gearjunkies’ came into the picture and pretty soon we decided that this would be the name for our ‘project’: Gearjunkies!

Back in the days we got to know this guy… This guy that had an even bigger love for gear then ourselves. It was Michel Osenbruggen better know in the ‘synth’ community as Synth.nl. His collection of gear and his studio was just a ‘Gearjunkies’ heaven. Many ‘classics’ you can think of, he owns. Just let me say it this way: If you would lock me up in his studio for a month, I would have a blast 24/7! There are so many toys to play with…. Time to get Michel to the table and ask him a few questions.

Your gear collection is just amazing. How came this about? What happened?
“Well like all collections I started out with just 1 synthesizer around 1990. I studied electronics back then and was fascinated that you could create sound with electronics. I knew nothing about synthesizers back then though. The first synthesizer I bought was a Yamaha TX81Z and I can remember that programming FM was not easy, so I took me quite a while to figure it out. And well by the time I got that I thought it was time for something new. And so I bought a new synthesizer to learn new ways to create sound as soon as I understood the current one. And I never sold any of them actually. And then the collection just kept growing and growing. I don’t spend much money on other things either actually.” 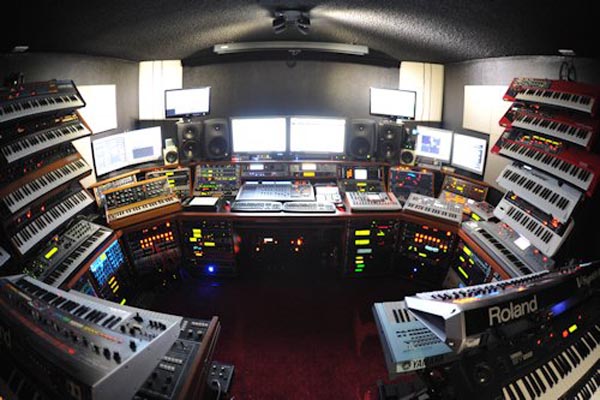 Do you get much response on your collection? Got to know people becauuse of it?
“Yes for sure. I get lots of E-mail and I still enjoy answering them. And even more since I started releasing my own music in 2005. I also get a lot of question from people that want to visit the studio, but unfortunately I can’t do that unfortunately otherwise I wouldn’t have time at all to make music any more.”

You must have a HUGE power bill, haven’t you?
“I often get the question if I have my own nuclear power plant in my garden. Well no I don’t. The power consumption of the studio is not that ridiculous as everyone thinks. There are a lot of leds on all the synthesizers and it looks very impressive in the pictures and movies where I have switched everything on, but normally I only switch on what I use at that time. When I’m working my studio does 5-6 Amperes on 220 Volts. Yes 220 since everything is behind a UPS that makes a new clean 220 Volts for me in stead of 240 volt. So lets say 6 Amperes then that makes 6 x 220 = 1320 watts. Our washing machine uses WAY more than that. I also tried what I use when I have everything on. And the maximum power consumption is 18 Amperes and that equals 18 x 220 = 3960 Watts. Not even that bad I think. But as said before. That only happens once a year when my friend Chris takes new pictures.” 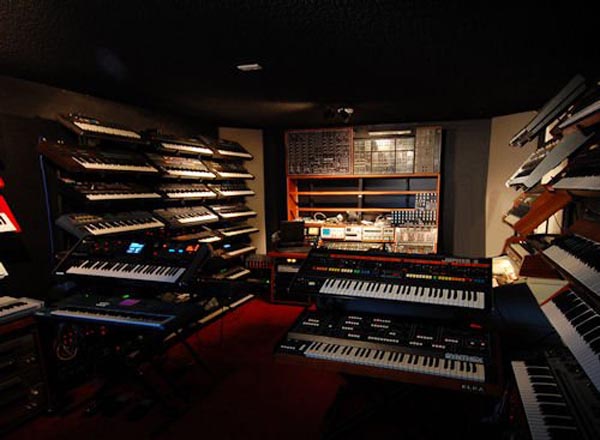 A collection like this must be worth a lot of money of course?
“Some people do ask me where I got all the money to buy all that equipment. Well I didn’t get anything for free. In 1996 I started my own company in the IT business together with a friend and 700 Dutch Guilders (about 300 euro now). That company has grown quite a bit the last years and luckily that hobby now pays for my music hobby. So yes I actually worked for my money with long days and not so much sleep. Eventually that has led to a burn-out in 2005 and that got me to start producing my own music and as a result of that I released my first CD in 2007. And now I make a bit of money with selling my music too.”

“Another question I get a lot is if I can live from my music. Well no unfortunately not. I would like to, but selling CD’s nowadays is not very good business. Especially not when you make Niche music like I do. I just make my music because I like it like that. So I’m more a semi-pro or semi-amateur I guess. Depends what you prefer.”

Will there be ever enough gear?
“I have gotten a few comments and questions if I really NEED all those synthesizers. Well no I don’t NEED them. But I do LIKE them. I could make my music for sure with a lot less synthesizers, but it would be less fun 😉 I made a lot of sounds on those machines the last years and I still know where they are. So when I look for a particular sound I know what to use. And no that doesn’t make it harder to make music like some people think (or want to think). But actually I have four hobbies that I do in my studio: Producing music, collecting synthesizers, creating sounds and also building my own synthesizers from electronic components.”

“And then there is the question how much synthesizers I need to be happy. Well the answer to that is simple: NONE. I don’t think the amount of synthesizers you have makes you more or less happy. There is more to life than that, like health, family, friends and music of course. If I would loose them all I’d probably buy another instrument and try to make music on that. I don’t know. At this time I don’t have to think about it fortunately.” 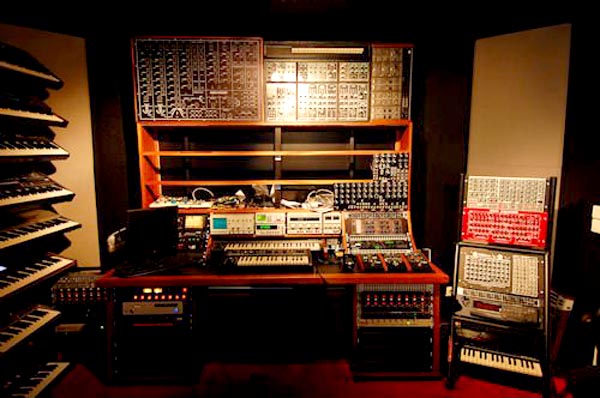 Where do you find the time with your busy schedule?
“Where do I find the time do create all that music and do all the DIY projects I’m doing? Well I just don’t sleep much 🙂 I do have a day job and even have some other hobbies as well. But my music I usually make when everybody is asleep at home. My wife usually goes to bed at 23:00 and then I go in the studio. Most of the time I go to bed at 03:00 and the kids are leaving for school at 08:00 so usually I’m awake then as well. And when I have a day off usually I work on my DIY stuff.”

Thanks to Michel for giving us a bit of insight in the life of a Gearjunkie! If you want more information on the music and of course the studio of Michel, visit his website synth.nl for great pictures and music.