Aalto, the innovative, fully patchable softsynth from Madrona Labs, is now at version 1.2. This update brings support for Windows 7 and Windows XP in addition to Mac OS X AU and VST. Aalto’s free-running complex oscillator and its lowpass gate module allow the creation of sounds that have been difficult or impossible to create with software until now. Aalto’s ingenious animated dials allow the user to both adjust and view signals in a way that is intuitive, fun and useful. 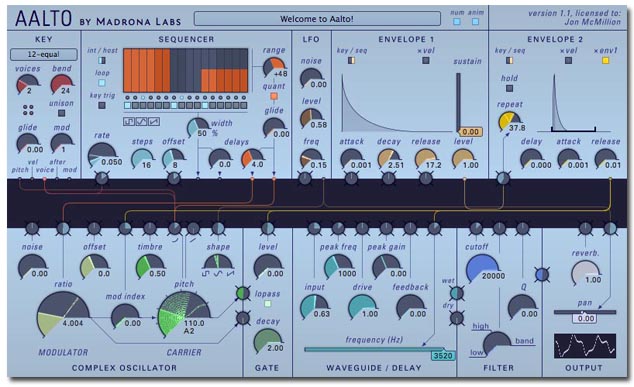 Aalto’s price is $99, which includes a license for both Mac and Windows versions. For a limited time, every buyer of Aalto will also receive a $99 credit toward the purchase of Soundplane, the highly anticipated touch-sensitive instrument from Madrona Labs.

The Aalto 1.2 update is free for existing Aalto customers. A non-time-limited demo version of Aalto is also available free of charge.