Roland has a long history when it comes to synthesizers, and with that heritage, the task to uphold that ‘good’ name. Ok, there have been some ‘mistakes’ in the past but with all their good products we can easily forgive those little mistakes. With the GAIA, released a short while back, Roland has another nice synthesizer in the middle class section available. 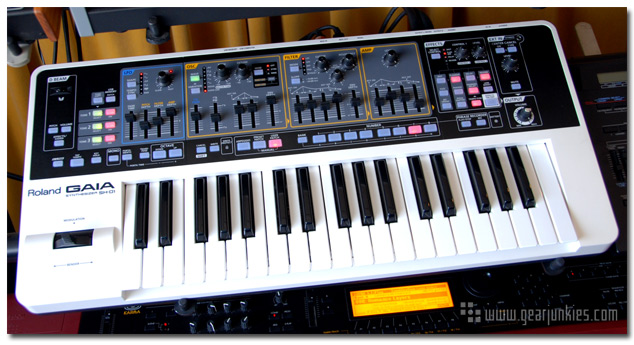 I like this kind of synth. Just like the Novation Ultranova and the M-Audio Venom. Affordable VA synths with great sound, interface, quality and, certainly, a big ‘fun-factor‘. They both cost around 550 Euro, where the Roland however costs a little 100 Euros more. Let’s see if these extra 100 euros are justifiable…

Some Specifications
The Roland Gaia SH-01, as it is called in full, has 37 touch sensitive keys and is 64 polyphony, which is quite impressive. My JP8000 only has 8 voices and the GAIA predecessor, the SH-201 only has ten voices. The GAIA has three oscilators with resonance filters, LFOs and Amps, nine envelope generators, an arpeggio, multi FX, phrase recorder and lots of rotary buttons and sliders.

At the rear we have our usual connections. A stereo out, a midi in and out, a pedal connection, and two USB slots. The headphone connection is also placed at the rear, which I don’t like. You have to pull the cord underneath or, if the synth is placed on a flatt surface, over the top. That’s just not very ‘handy’. So my (Gearjunkies) user tip for the Roland R&D department, … put the headphone connection at the front!

Appearance
I have to admit the GAIA looks very slick. It’s not completely white, because with the right light setting the color changes slightly into off-white. I started with music and synths in the 80s and during this period all synths were black, with a brown DX7 as an exception. Nowadays a dark synth seems to be the exception. But, that said, I do like the slick (light) look of this GAIA.

The rotary buttons, press buttons and sliders feel solid and firm. All buttons are lit and the buttons with a dual function have different (dual) colors. All buttons, faders, sliders, pitchbender and rotaries respond very well and are very accurate. Also the D-Beam isn’t missing.

I appreciate it that Roland didn’t go for the ‘RETRO‘ look. That is another ‘design’ direction that is fashionable these days. With a model name like SH-… you would expect that. A modern synth should look modern!

Something I do miss, is a display. Editing sounds is pretty much easy and simple as all the edit tools are placed on the GAIA itself. However, if you take the GAIA onto the stage a display would be very useful. You don’t have to write the presets down onto a note if you don’t know the preset list by heart. There is an editor for the GAIA available but then you need a laptop (on stage).

Lets play!
The GAIA has a 64 voice polyphony, and … you’ll need that! Because the GAIA is not one, but actually three synths. You can layer sounds simply with Tone 1, 2 and 3 buttons. With the select button you select the desired sound and with the on/off function you turn them on (or off). You don’t need to select a MIDI channel as channel 1 is the standard send or recieve. My surprise was big when I select channel 2 in Cubase by accident. There is a complete General MIDI on board of the GAIA!

The GAIA is a VA synth which makes him sound big and phat. Especially when you start layering sounds. All standard waveforms are available and the classic superwave isn’t missing of course. The waveforms are all sampled as with every good VA synth. Although they are sampled, the waveforms don’t sound like it, with the supersaw as an exception. It seems that Roland hasn’t sampled the superwave sampleform correctly!

It all sounds ok till the G3 note. But as you progress to G# you can hear a difference in the waveform sample. From G# (in the third octave) and up, the sound gets dim (or dull), it loses its high frequencies. I must admit that’s a little sloppy. With the help of I4 Muzique, I have tried this out on two other GAIAs and all three had this issue.

Each waveform has three variations, which is very useful when layering of sounds. It makes it sound more ‘natural‘, especially when you detune your waveform. The ‘Tone’ buttons light up orange when you’r in the edit mode. Tone 1 and 2 have a ringmodulator and an oscilator sync. The ring modulation sounds very good and the OSc sync has a lovely slide effect. If you use this function, the GAIA switches to MONO however! But this is not uncommon, other synths have this as well.

The GAIA filters are pretty much standard, but sound good. The low- and highpass filters are switchable between 12dB and 24dB. I really liked the lowpass filter. Together with resonance the sound was incredible, and even with a lot of resonance it kept its cool! So the trance and hardcore ‘guys’ will love this filter very much!

The factory presets of the Roland GAIA will give a clear and accurate image of what this machine is capable of. I was really impressed by the deep basses. But also the full and warm pads are lovely. The lead sounds can be subtle and on the other hand scream without losing any dynamics. Again, … all good! 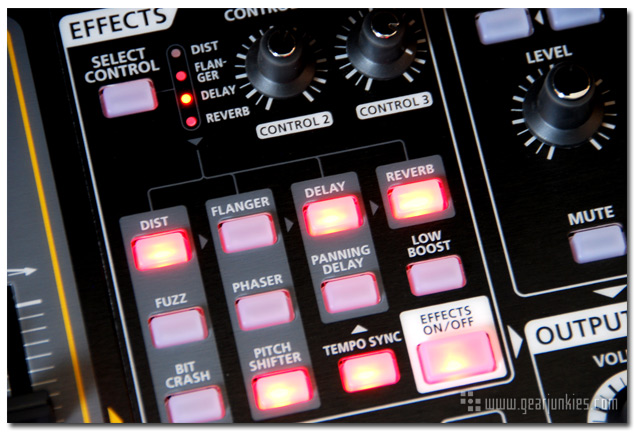 Effects
These great sounding presets are supported (of course) by good effects. With the GAIA you’ll get four groups. Actually three as the reverb groups is just … reverb. The first group are overdrive effects like distortion and fuzz. Great on bass and lead sounds. The second group are the modulation effects like a phaser and a pitch shifter. The final group are two delays: a mono and a stereo panning delay. Editing is pretty easy. With the ‘select’ control you can choose your effect group and with the control rotary button and volume button you ‘take what you need’. All effects are good, however the reverb effect sounded too digital for my liking.

Arpeggio and Phrase Recorder
The arpeggiator standard has 64 patterns, with the usual up, down and random variations. Everything is MIDI synced of course. With the Phrase recorder you can record (and play) your own arpeggios. The GAIA puts them automatically in a loop. However you need to play your arpeggios very strict and tight as there is no quantise function! You can record and save eight ‘phrases’, which seems a bit little to me. Especially when there are 64 standard ones.

Conclusion
Yes, … I will admit it. I have fallen in LOVE with the GAIA. Even with great alternatives in my studio like the Utranova, Supernova, JP8000 and the Venom. The GAIA is a great synth! But, … the fact you’ll have to pay an extra 99 Euro for the editing software and the fact that it is missing a display, is in my opinion ‘not cool’. The competition like Novation and M-Audio provide the software for free!
This machine can be used for any (electronic) music genre. Any producer will get lots of great sounds and .. fun out of this VA synth. And the longer you use this synth the more you’ll get out of it. You will discover more and more.

At the start of this review I raised the question, is the extra cash needed for the GAIA justifiable? In the end, the answer to that question can only be answered by … you! Personally, I can only repeat myself: “Darn, … I love this synth!“

I want to thank Roland Europe for their cooperation.