VoiceLive 2 is the world’s most popular vocal multi effects processor, having been severely road-tested by singers all over the world for years. So, when something proves to be really great – why not go the extra mile and take it up a notch? Apart from all the amazing features of the original VoiceLive 2, this new Extreme Edition offers twice the looping memory, an enhanced microphone preamp for ultimate transparancy, new breathtaking Extreme Edition presets and an appearance that is sure to make a major impact on any stage with its new, extruded aluminum chassis and artwork in the coolest of blue! 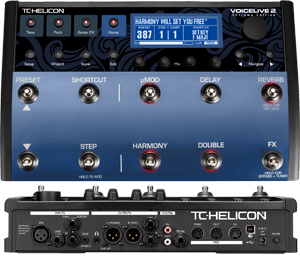 be combined, tweaked and stored as personal presets for anything from ’smooth-producer-like’ sounds to ’dirty-and-in-your-face’ outrage to ’downright-spacious’ weirdness – or anything in between. At the end of the day, it’s all about every singers’ natural right to express themselves on the stage!

And to open creative vistas even further, VoiceLive 2 Extreme Edition’s on-board looper now records for twice the loop time compared to the original version. This allows singers to build layers of vocal loops up to 30 seconds in stereo (60 seconds in mono) for instant enjoyment as well as for a source of endless inspiration.

VoiceLive 2 Extreme Edition Features
• Twice the looping memory (time) as the original VoiceLive 2.
• Enhanced microphone preamp for ultimate transparancy.
• New extruded aluminum chassis and artwork in the coolest of blue!
• Based on the original VoiceLive 2 – having passed its real-world testing with flying colors.
• Limited number of units – only one exclusive batch!