eyoControl 1.5 is out with a brand new look and several improvements. This update includes new visuals to the app and most of its controllers, local MIDI interface connectivity and Accessibility/VoiceOver support to enable usage for the vision-impaired. 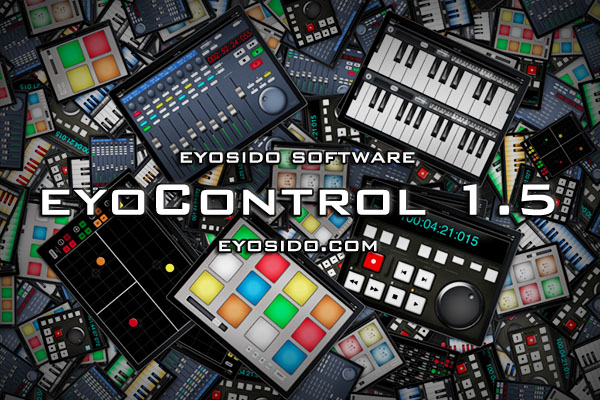 It also includes various fixes and enhancements, as detailed below:
– Local MIDI interface connectivity support: connecting your iPad to your synthesizer through an iPad MIDI interface or a USB to MIDI cable, you can then use mXY, Pad or Keys to control your MIDI instrument.
– New in Surface controller:
. New visual design.
. VoiceOver support: user interface elements report their name and function where applicable. Faders, knobs and sliders provide their current position, and context sensitive buttons such as track buttons report their current state. On the Panel page, banks report their number and content once enabled.
. Larger Timecode display and scrub wheel.
. Timecode display can now be switched between SMPTE and Bar/Beats.
. Auto-init at startup (same as the INIT button but automatically called when launching the controller).
. Next/Previous bank buttons (alternative to swipe on the fader area).
. Track meters display can be toggled on/off.

– Top-right connection icon on controllers is now visible only when connecting to eyoControl Server.
– Fixed display glitches when starting a controller in landscape orientation.

Requirements:
– iPad running iOS 4.2 or above.
– a local WIFI connection or a MIDI interface for iPad or equivalent.
– a laptop/desktop computer running either MacOS X 10.4 or above, or Windows XP/Vista/7 (rtpMIDI required when using Windows) or other system compatible with the iPad wireless MIDI protocol.
– a Digital Audio Workstation software / audio sequencer with MIDI support or a MIDI instrument.