MOTU is now shipping MachFive 3.0, a major upgrade to their universal sampler for creative music production. Rebuilt from the ground up, version 3.0 includes a new user interface design, an extensive 45 GB sound library, seven signature instruments based on new scripting technology, a new hybrid synthesis engine, licensed algorithms from the IRCAM research institute, and many other new features and enhancements. 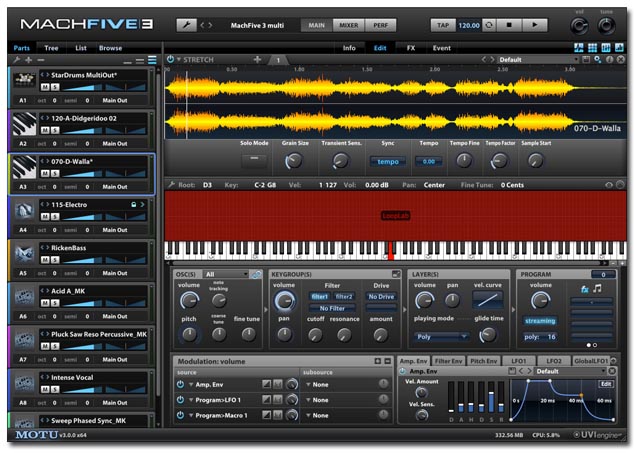 MachFive’s signature instruments set a new standard for virtual instrument realism and ease of use:

J-Bass™ — a deeply sampled and scripted electric bass with a variety of playing techniques, including finger and pick (with or without muting from the right hand), legato, hammer, and slide.

Percussiv™ — a comprehensive latin/world percussion set with both General MIDI and default mappings.

New Xpander filter — Based on the venerable Oberheim Xpander, this new filter provides 37 modes, each a separate filter in its own right.

IR Verb™ — A CPU-efficient convolution reverb processor that provides hundreds of presets for acoustic spaces, classic high-end studio reverbs, vintage plates and spring reverbs, plus eclectic impulse responses for sound design. Drag and drop your own IRs, and you can even edit IR waveforms directly.

Drag and drop operation — Supports easy drag and drop importing of audio files, loops, and samples to and from the computer desktop or a host software application.

Multi-sample import — Drag and drop multiple samples in one operation to map them intelligently into layers or splits. With straightforward sample-naming conventions, hundreds of samples can be precisely mapped in seconds with a single drag and drop operation.

System specs, availability, and pricing
MachFive 3.0 supports Mac OS X (10.5 or later) and Windows 7/Vista. It operates stand-alone or as a plug-in (AU, VST and RTAS). 64-bit operation is available for supporting systems and hosts.

MachFive 3.0 is now shipping. Price remains the same at $495. Registered version 1 and 2 users can upgrade to version 3 for $179. A competitive upgrade is also available, with proof of ownership, for $295.