According to TC Helicon VoiceLive Rack is the ultimate solution for recording studios in all shapes and sizes as well as bands with a need for permanent world-class vocal effects in their live sound rigs! Voicelive Rack will be available in october 2011 with an estimated price of 799 Euro. 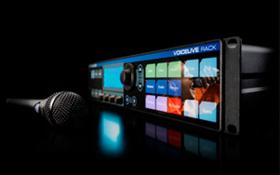 as fast as it’s easy including digtal recall of a complete Mic Channel with gain and phantom settings. Of course, it’s the wide palette of included effects that offers tons of creative possibilities for the open-minded vocalist – a one-way ticket to ‘The Land of Opportunities’ for adventurous singers everywhere.

Ultimate Control – Included MP-75 Microphone
Control plays a major part in all singers’ possibility to express themselves, and VoiceLive Rack comes with a TC-Helicon MP-75 microphone that allows the singer to control the effects of VoiceLive Rack directly from the microphone. In a live setting this offers the obvious advantage of freedom to explore every corner of the stage while controlling effects, and in the studio, both the engineer and the performer can access the effects – a never-before-seen flexibility that makes spontaneous creativity while tracking and mixing an actual option. For hardcore control freaks, VoiceLive Rack can also be controlled via a footswitch.

Program and Recall
With the extremely versatile collection of pristine vocal effects, the possibilities are virtually endless. Fresh from the factory, VoiceLive Rack comes with an impressive 238 presets, but there is memory for an impressive 400 presets in total. Everything is stored – even the gain setting of the cutting-edge, digitally-controlled analog mic preamp.

Versatile Harmony Control
VoiceLive Rack can generate vocal harmonies controlled by a real-time, analog signal by a guitar, with MIDI data from a keyboard or by setting key and scale. Using the MIDI option, users gain 100% control over the added harmonies, but as singers all over the world has been experiencing over the last decade, TC-Helicon’s harmony algorithms hardly need any help creating divine-sounding vocal harmonies! Pre production VoiceLive Rack units are already in rehearsals for major touring acts coming in the Fall. For instance, VoiceLive Rack is already sitting comfortably in George Michael’s current touring rig!