Universal Audio (UA), a leading manufacturer of high-quality audio recording hardware and software, is proud to announce that the Ampex® ATR-102 Mastering Tape Recorder –– considered by many engineers to be the best-sounding tape machine for final mixdown –– is now available as a faithful plug-in emulation on the UAD-2 Powered Plug-Ins platform. 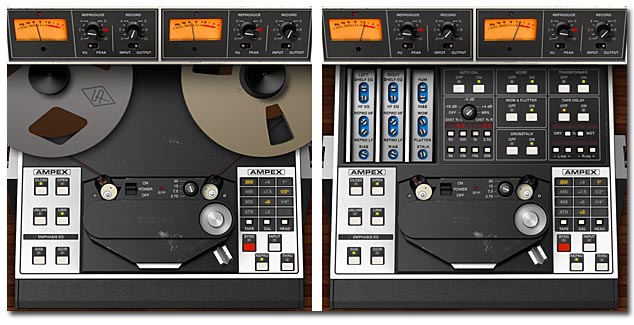 For more than three decades, the two-channel Ampex ATR-102 Tape Recorder has turned music recordings into records. The perfect complement to the workhorse Studer® A800 Multichannel Tape Recorder Plug-In, the officially sanctioned ATR-102 plug-in provides the final, cohesive analog polish and punch for any in-the-box mastering session, without the ongoing maintenance and calibration of a physical tape machine.

Impeccably developed over a nine-month period in the renowned UAD engineering tradition — and incorporating presets from noted ATR-102 users Chuck Ainlay, Richard Dodd, Buddy Miller, and Mike Poole — the ATR-102 Mastering Tape Recorder Plug-In faithfully replicates the unique dynamics, frequency response, and saturation characteristics of the original hardware. Scrutinized and fully authenticated by Ampex Corporation, the sound of the ATR-102 plug-in for UAD-2 is virtually indistinguishable from its analog cousin.

“With the Ampex ATR-102, we’ve taken the time to provide all the popular tape formulas and hands-on calibration options of the original hardware,” said Matt Ward, President of Universal Audio. “With a mastering tape deck as iconic as the ATR-102, we wanted to make sure that its sound remained fully intact in the virtual world.”

“To bring the complexity of a such an iconic tape recorder as the ATR-102 to the digital world is no small feat,” said Gordon Strickland, Chairman and CEO of Ampex Corporation. “Universal Audio is the only company we could trust to faithfully and accurately model our Ampex legacy products, as they too have a legacy that spans back half a century with their analog products.”