Analogue Solutions is proud to announce availability of Leipzig-S, the latest addition to its lengthening line of critically-acclaimed, quality-crafted ‘boutique’ designs from founder Tom Carpenter in the true spirit of vintage analogue synthesisers befitting the true analogue synth enthusiast. 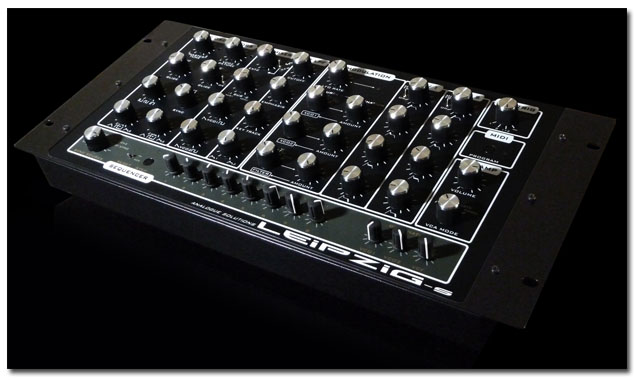 Evolving from its namesake Leipzig (rack-mounting) andLeipzig-k (keyboard-endowed) analogue monosynth predecessors, the rack-mountable/tabletop Leipzig-S literally goes several steps further by incorporating an in-built eight-step analogue sequencer that can be used to produce simple melodic lines as well as acting as a modulation source to affect the filter cutoff (or to create additional effects, depending on other control settings). VCO1, VCO2, and the VCF are all available as sequencer destinations; seemingly simple, yet favourably flexible, the step sequencer can be creatively controlled (clocked) by multiple sources — at audio frequencies (using VCO2 as a clock source), or using the output of the sequencer itself as an audio source to be ‘played’ via MIDI while the eight step controls then alter the ‘waveform’/tonal content, for example, such are the adventurous advantages of packaging an analogue step sequencer with a true analogue monosynth!

The entire design is traditional early-Eighties analogue (voice and modulation) circuitry, comprised entirely of discrete components and op-amps (bar, of course, the digital sequencer controller and MIDI-CV interfacing); since the Leipzig-S is a strictly no-memory affair, all controls are not quantised, resulting in an authentically vintage sound, replete with musically desirable quirks and subtle artifacts (much in the same way that, say, a valve amp or vinyl record adds sonic character) — unlike some other modern ‘analogue’ synths that arguably sound almost as perfect as DSP analogue modelling.

With electronic percussion having influenced the choice of routings, the Leipzig-S boasts a huge range of modulation possibilities to facilitate creating the widest possible range of sounds, including deep basses, sound effects, analogue loops, and (obviously) electronic drum sounds.

With this, his latest design, true analogue synth enthusiast Tom Carpenter is confident that he has achieved a modern analogue synth that truly does sound vintage!

Leipzig-S is available to order directly from Analogue Solutions for £649 GBP (excluding tax and delivery) — delivery is approximately four weeks from receipt of payment — or through one of their dealers.