Novation are excited to announce that Twitch – the touchstrip DJ controller – now has a free application that allows Twitch to control parameters and build custom mappings in Ableton Live, and any other MIDI-compatible software. 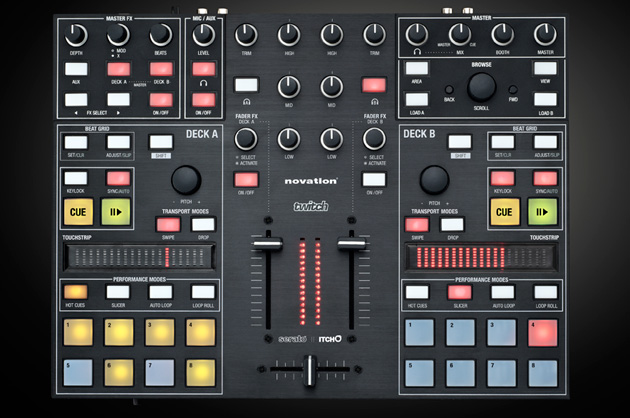 The Twitch Live Translator software receives ‘raw’ MIDI messages generated by Twitch, and translates them into MIDI messages that can be ‘learned’ to parameters in Ableton Live. Every Live user will want to use Twitch in a slightly different way, so this allows a blank starting point to map hardware controls to parameters in Live in any way you want. The application has been created using Cycling 74 Max/MSP. This means that anyone can run this application — regardless of whether they own Max/MSP — but users of Max/MSP will be able to open the source code to edit and tweak to their own preference. What’s more, Novation are encouraging users to share and redistribute their versions to the wider community on the Novation forum: forum.novationmusic.com

Twitch was designed in partnership with Serato for their ITCH software (which comes with Twitch), and a Traktor mapping and overlay have been available for Twitch since the controller was unveiled. Now, with full control through the Twitch Live Translator, the world of Twitch has been opened up to Ableton Live DJs and performers. Twitch has a built in two-in four-out audio interface and 16 backlit trigger pads, as well as conventional DJ mixer controls and plenty of rotary encoders, making it an attractive option for Live control.