From mild tone-shaping or adding a bit of grit to full-on total waveform destruction, Kombinat Dva, the long-awaited sequel to our popular Kombinat plug-in, is a complete toolbox of sonic warfare.

With 13 different options in each of the three distortion engines (plus pass-through), Kombinat Dva is capable of sophisticated and unique sounds. Want to add a ring mod to the low end, a mild tube clip to the mids, and a bit-reduction algorithm to the high end? No problem. Want to run your signal through three sine-warps or fuzz algorithms in series? This is your box. 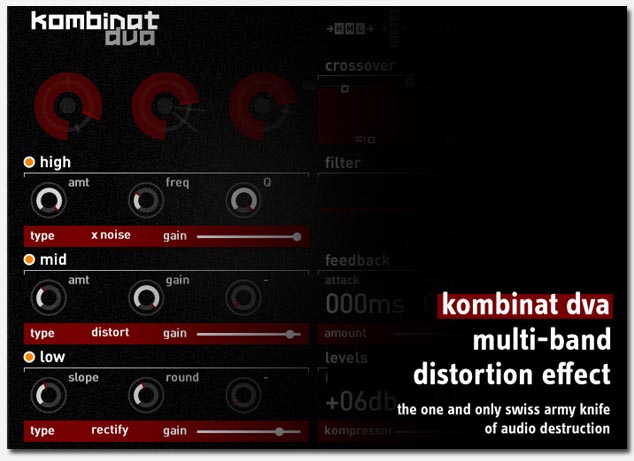 Kombinat‘s signal structure allows for a fairly broad palette of sounds, as each segment of the overall effect is a versatile tool in its own right. On the front end is a full “DJ-style” band-killer EQ; this leads to the three distortion engines, which may be used in multi-band mode for subtle surgery, or in series mode for complete signal destruction. The engines go in to a two- or four-pole lowpass filter of our own design, and then in to a compressor which we have configured for one-control operation.

Taken as a whole, Kombinat is a tweaker’s paradise, yet designed so that it is easy to just grab one of the 80 presets and touch it up a bit to suit the source material.

Crossover: Kombinat Dva features a DJ-style three-band isolator EQ for band-killing effects and extreme tone-carving on the front end. This leads to the three distortion engines, which can be run in crossover (multi) mode, or in series.

Multiple Distortion Types: Kombinat Dva adds six new algorithms to the seven in the original Kombinat, for a total of 13 paths to destruction. From subtle tube-style clipping to the bizarre distorto-delay of the Nerd Rage algorithm, Kombinat Dva can cover all the bases without unnecessary complexity.

Feedback: If the algorithms weren’t enough, Kombinat Dva has an internal feedback control, tied to an envelope follower. Results may vary, but are always hairy.

Filter: Kombinat Dva has a resonant low-pass filter on the output that self-oscillates at high Q like the original Kombinat, but also adds a second low-pass type, and a bypass.

One-Kontrol Kompressor: A favorite feature of the original Kombinat, the one-knob compressor, tuned for collapsing distorted signals to roadkill, remains in Kombinat Dva. Except it’s a slider now, and “one slider compressor” doesn’t sound as cool.

Presets: Kombinat Dva includes the 40 presets from the original, plus 40 all-new presets that take advantage of the new engines and feedback, for a total of 80 presets.

Kominat Dva requires OS X Intel 10.5.1 or later, or Windows XP SP 2 or later, and the installers include both 32- and 64-bit versions. If you already own the original Kombinat, you can purchase Kombinat Dva as an upgrade, available in the Upgrades and Crossgrades section.