Samson’s Graphite 49 USB MIDI Controller gives you all the performance and production control you need to get the most out of your music software. With a feature set that is both useful and accessible, the Graphite 49 is a sleek, powerful tool that allows you to express your most dynamic musical ideas. 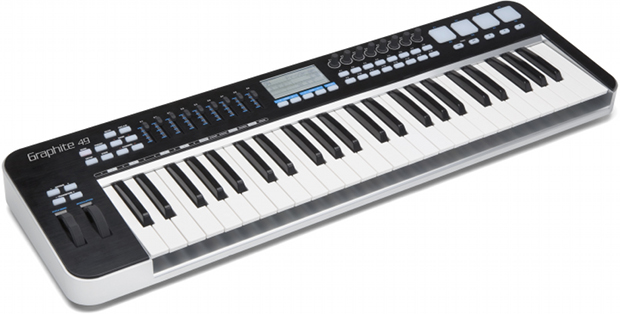 The Graphite 49’s semi-weighted keyboard is designed to feel more like an instrument than a controller. It comes equipped with velocity-sensitive keys for capturing the dynamics of a performance, while aftertouch offers customizable control over a variety of effects and parameters. With dedicated Transpose and Octave buttons, as well as classic Pitch and Mod wheels, the Graphite 49 puts a wide range of musical expression and tone manipulation at your fingertips.

Take full control of your DAW and virtual instruments with the Graphite 49’s nine faders, eight encoders and 16 buttons, all customizable for the ultimate in hands-on control. In addition, players can utilize up to four zones for creating splits and layering sounds. The Graphite 49 also features four large velocity-sensitive trigger pads, each with two banks, that can be used to tap out drum beats, cue one-shot samples or start and stop sequences. And the Graphite 49’s large LCD screen displays the behavior of every function in real-time, enabling intuitive mapping with any software you’re using.

With a body design thinner than most controllers, the Graphite 49 is perfect live and in the studio. Its sleek, angled top panel offers easy viewing in any environment. Use it with your favorite iPad MIDI apps via Apple’s iPad Camera Connection Kit. Bundled with the Graphite 49, Native Instrument’s Komplete Elements software offers a vast range of instruments and effects for modern music production, composition and sound design.

With the great feel and total control that keyboard players and studio professionals everywhere crave, Samson’s Graphite 49 USB MIDI Controller brings out the best in performance and production capability.