Now, for the first time ever, you can mix and record up to four channels of audio into your iPad. The Alesis iO Mix is the first device that turns your iPad into a powerful portable studio, allowing you to record multiple mics or instruments directly into GarageBand or any other compatible Core Audio app. 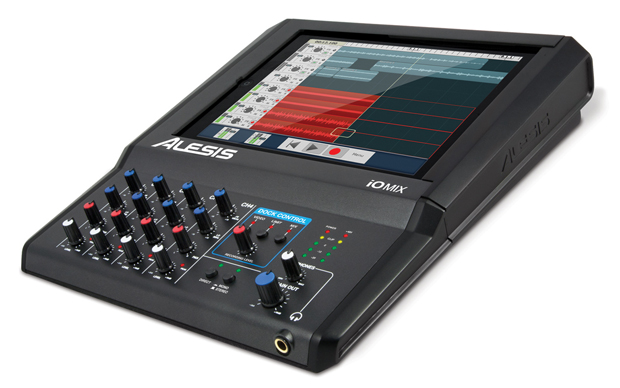 With the iO Dock, Alesis was the first to make your iPad studio-compatible. Now with the iO Mix, your iPad becomes your studio. All the connections you need are onboard, including four combo XLR-1/4″ input channels and balanced, stereo 1/4″ outputs. The iO Mix also has a video output, making it perfect for everything from presentations and corporate meetings to home entertainment and live performance visuals.

ROOM FOR FOUR
With the iO Mix’s four-channel capability you finally have everything you need for mixing and recording on your iPad, all in one device. There’s no more clunky dongle connections or USB cables needed. Your iPad is seamlessly integrated into a compact mixing console that will be immediately familiar and easy to use. When you close iO Mix’s hinged door, your iPad is completely enclosed and secure — you’ll hardly be able to tell that they’re separate devices.

CONNECT & CREATE
iO Mix allows you to connect virtually any piece of recording gear to your iPad: microphones, instruments, speakers, headphones and more. Four combo XLR-1/4″ input channels are exactly where you need them on the rear of the unit. Each has trim, channel gain, pan, and low & high EQ controls located right in front of you. Push-button High Pass Filters are also available on each channel to eliminate low-frequency interference in live mixing and recording situations.

STUDIO TO GO
With its compact design, iO Mix is the perfect portable studio. Bring it to your band’s practice space, coffeehouse gig or weekend recording session. Switchable 48V phantom power allows you to use studio condenser microphones and iO Mix’s guitar-direct switch makes guitar recording easy. You don’t even need an amp! Simply connect your guitar or bass, flip the switch and use your iPad to add effects like reverb and delay. Balanced, stereo 1/4″ outputs and 1/4″ headphone output are also onboard along with a switchable limiter for clip-free recordings.

WIRELESS WHENEVER
iO Mix is Core Audio-compliant, allowing you to use it with virtually any app in the App Store. Plus, your iPad’s WiFi, Bluetooth, AirPlay, and 3G connectivity, allow you to tailor your sound at a moment’s notice or playback audio through compatible wireless speakers. Download new effects or filters to deal with unexpected live sound needs, or download songs, videos or entirely new applications to keep your audience entertained during a gig or the band’s creative energy flowing during a recording session.

VIDEO VERSATILITY
Along with its four-channel mixing and recording capability, the iO Mix’ s ability to playback video makes it ideal for applications that were previously impossible. You can use the iO Mix to not only mix and record, but also playback live performance visuals behind the band. The iO Mix is also great for corporate presentations and business meetings, allowing up to four speakers to be mic’d and have video playing back simultaneously. With the optional Alesis Module Mount, you can attach the iO Mix to a nearby mic stand and have easy access to instantly adjust any mixing, recording or video-playback parameter.

Turn your iPad into a portable mixer and flexible recording studio, with the iO Mix, only from Alesis.