Since the launch of the JUPITER-80, many professional keyboard players and producers have praised its expressive SuperNATURAL sounds and live-performance capability. With the Version 2 software update, the JUPITER-80 offers new features that enhance its already formidable synthesis power, and provides more flexibility and creativity for musicians designing their own sounds. 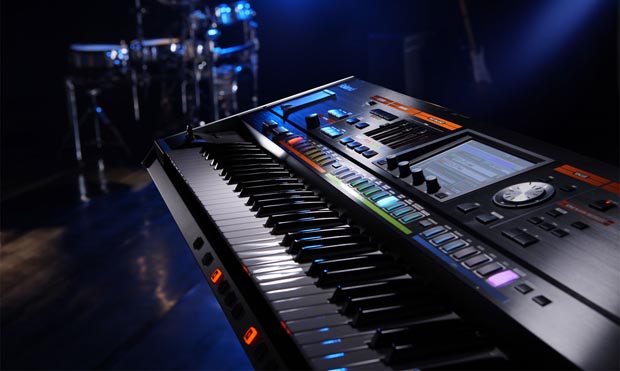 The filter section is one the most important tool kits for editing SuperNATURAL synth tones. Version 2 adds three types of vintage low-pass filters to the lineup. With the addition of these filters, each with unique cutoff and resonance behaviors, you can faithfully recreate coveted synthesizer sounds of the past.

The previous MFX section allowed only parallel connection of the four effects for one Live Set, but with Version 2 you can select MFX structures that let you place up to four effects in series. By using these five MFX structures, you can take full advantage of the JUPITER-80’s powerful collection of effects to create intense electro-synth sounds and intricate ambient synth textures.

The new Registration Play screen provides easier access to your sounds during live performance. You can see all eight Registrations in a bank at a glance, and select them directly via the touch screen.

The Version 2 update offers smoother integration with SONAR software. A dedicated plug-in for your computer lets you easily map the JUPITER-80 to control SONAR’s faders and soft synths.