Vestax Corporation introduces the VCI-380, a 2-channel DJ controller with a built-in DJ mixer, FSR pads and bundled with world acclaimed Serato ITCH. The VCI-380 will make its debut at Frankfurt Musik Messe 2012 in Germany. 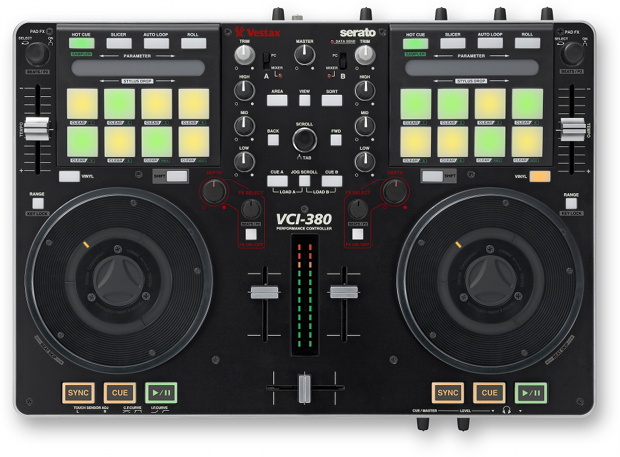 The DJ scene and the technology surrounding it have always evolved together. The sole concept of Vestax has always been to create innovative and useful instruments, giving DJs what they want. With the breakthrough of “controllerism”, it was obvious to develop a hardware that answered new needs. The VCI-380 is a powerful and creative 2-channel DJ controller with a built–in mixer, optimized to enhance the DJs performance and take a new approach in manipulating music. Mix, scratch, cue, effect, sample, trigger, loop and slice. The VCI-380 is the key that opens the door to limitless possibilities of controllerism.

The ultra responsive FSR pads inherited from the Vestax Pad-ONE are velocity sensitive and controls after-touch. Each pad triggers the 5 performance modes; Slicer, Roll, Sampler, Loop and Hot Cue of Serato ITCH, and enables a unique function of the VCI-380 named Pad FX. An innovative feature, which applies FX to the 5 performance modes using after touch, creating amazing combinations to manipulate music in ways nobody else has before. Parameters for Pad FX can be altered with the ribbon control, which also swipes, holds and needle drops tracks.

The VCI-380 functions as a powerful stand-alone mixer, which enables connection with external devices such as CD players, turntables, MP3 players and DVS systems through its hybrid RCA phono/line inputs. Along with standard Trim, EQ, and fader curve control, the two filter knobs function as Hi-pass filters to add an extra touch to the DJ’s performance. The built in high quality 24Bit/48kHz audio interface based on technology developed with the critically acclaimed Vestax VCI-400, features BIT-Perfect audio powered by a studio grade asynchronous USB streaming system. This extremely advanced technology provides low latency, premium sound quality and outputs the DJs mix, analog or digital, at its true clarity.

The VCI-380 was designed hand in hand with Serato, and takes perfect control of ITCH and its outstanding features. The extreme integrity between the VCI-380 and Serato ITCH provide and arsenal of music craft tools which will inspire controllerists and DJs of all kind. As a general midi controller, the VCI-380 is also compatible with other DJ midi software.