Zynaptiq announce the introduction of UNVEIL, a real-time de-reverberation and signal focusing plug-in for the Mac OS X AudioUnits (AU) format, at their booth at the Frankfurt Musikmesse, Hall 5.1 Booth A91. 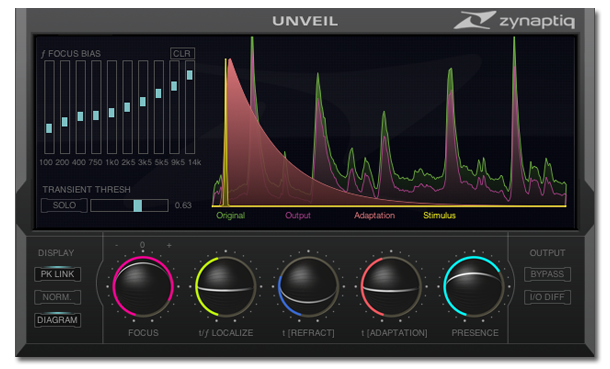 UNVEIL is a real-time, de-mixing based plug-in that allows attenuating or boosting reverb components within a mixed signal of any channel count, including mono sources, as well as modifying contained reverb characteristics. Additionally, UNVEIL allows bringing the key features of a recording into focus, or moving them to the background, by attenuating or boosting perceptionally less important signal components. Based on
Zynaptiq’s proprietary, artificial intelligence based MAP (Mixed-Signal Audio Processing) technology, UNVEILʻs applications include:
• Audio engineers can attenuate reverb in recordings, gaining flexibility both in microphone placement as well as mix-down.
• Film mixers and dialog editors can remove reverb from dialog and location sound, reducing the need for dialog replacement and foley, and match reverb amounts across different takes or perspectives.
• Music producers can turn drum-loops rich in reverb into dry recordings, and vice-versa.
• Sound designers and foley artists can remove reflections and ambience from suboptimally captured sounds.
• Mix and mastering engineers can bring key mix elements into focus by attenuating components commonly referred to as “mud”.

“Removing reverb from recordings has always been difficult, if not impossible.” Zynaptiq CEO Denis H. Goekdag said. “Existing de-reverberation strategies either manipulate signal dynamics, require specific channel formats, are limited to certain signal types, or all of the above. Not so with UNVEIL, which effectively “listens” to your signal and discerns which parts of the signal are reverb, much like a human would, and then allows you to manipulate just those parts, even when processing mono sources. As it turns out, the process is not limited to processing reverb, but can bring out or move back the key elements of a recording nicely. Dialog editors, mix engineers for music and film, music producers as well as sound designers will make good use of this tool!”

The UNVEIL real-time features at a glance:
– Attenuate or boost the level of reverb components in mixed signals.
– Modify reverb characteristics within a mixed recording.
– Bring key features of any signal into focus by attenuating perceptively less significant components.
– Works with any sample rate and channel count, including mono sources.

Zynaptiq GmbH, based in Hannover, Germany, creates audio software based on artificial intelligence technology, and is also known for their real-time polyphonic pitch-mapping plug-in PITCHMAP. Zynaptiq will demonstrate UNVEIL at their booth H5.1 A91 at the Frankfurt Musikmesse, March 21st until March 24th, and hand out personal discount vouchers for both UNVEIL as well as their polyphonic pitch processor PITCHMAP to visitors.

UNVEIL as well as a free trial will be available from the Zynaptiq website Monday, March 26th. UNVEIL comes as Mac AU (AudioUnits) Plug-In, with VST and AAX support for both Mac and Windows platforms planned for later in 2012. UNVEIL is priced at USD/EUR 399,- and a limited-time introductory price of USD/EUR 269,- is available until June 1st, 2012 (prices in EUR inclusive of 19% VAT).

For more information, please visit the productʼs website at www.zynaptiq.com/unveil/.