Pioneer’s most versatile controller, the DDJ-ERGO-V is popular among DJs for its usability, portability and compatibility with virtually all DJ software. And now the white DDJ-ERGO-V is available in a sleek new black model – the DDJ-ERGO-K. 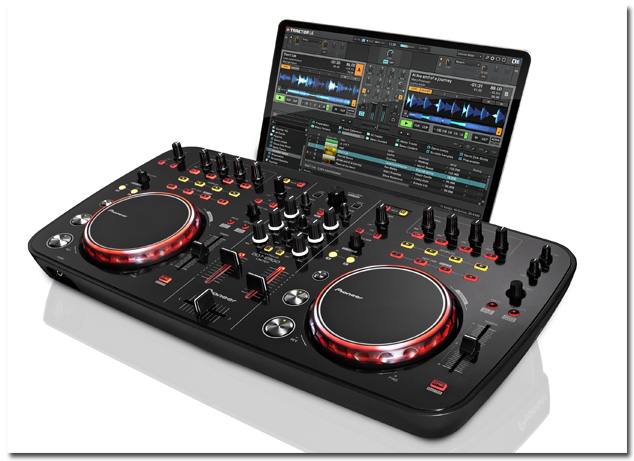 More than just a colour update, the DDJ-ERGO-K places the emphasis on the DJ experience with a polished, professional appearance and user-friendly layout. With a glossy black top panel, satin black side panel, chrome-plated Play/Cue buttons, white LEDs encircling the jog wheel, and rubber pots on the dials, the DDJ-ERGO-K is the ultimate in DJ-friendly equipment.

The DDJ-ERGO-K has been ergonomically designed to work natively with Traktor LE 2 software which comes bundled in the box. The controller’s layout mirrors Traktor LE 2’s graphical user interface so the software’s most important features are intuitively positioned and accessible at the touch of a button.

Along with its native compatibility with Traktor LE 2, the DDJ-ERGO-K’s MIDI functionality makes it compatible with virtually all other DJ software on the market including Virtual DJ, Serato, djay and MixVibes’ Cross DJ/Cross.

The DDJ-ERGO-K’s unique Pulse Control feature adds a visual dimension to DJing by using lights to show which decks are in use, which features are engaged and how accurate DJs’ beat matching is. Powered by a single USB cable connected to a laptop, the portable DDJ-ERGO-K requires minimal set-up.

Key features of the DDJ-ERGO-K

– Pulse Control adds visual dimension for precision performances
The DDJ-ERGO-K’s Pulse Control lights give a visual representation of DJs’ performances by showing which decks are in use and which effects, filters or pitch controls are engaged. If a high-pass filter is applied, the jog wheel’s white LEDs spin anticlockwise while a low-pass filter sends them spinning in the opposite direction. The jog wheel’s Mix Pulse lights shine brighter the more accurate the DJ’s beat matching is and its FX Pulse lights show which effects have been applied. The Beat Pulse LEDs in the channel faders match the beat of the track in play while the Launch Pulse lights travel from the Load button to the jog wheel when a track is loaded.

– Laptop integration design keeps screen in sight at all times
The DDJ-ERGO-K’s innovative laptop design allows DJs to place their laptops underneath the controller so they can set up in small spaces and keep the screen in view while they play. Plus, the DDJ-ERGO-K’s removable legs mean DJs can tailor their set-up to suit their environment.

– Completely USB-powered for easy set up
Powered by a single USB cable connected to a laptop, the DDJ-ERGO-K eliminates the need for an external power supply without compromising on functionality or sound quality.

– High-quality, professional design that looks good in every environment
With its glossy black top panel, satin black side panel, chrome-plated Play/Cue buttons and white LEDs encircling the jog wheel, the DDJ-ERGO-K looks the part in the studio, the booth or at home. Plus, with the same ergonomic rubber pots on its dials as Pioneer’s pro-mixer, the DJM-T1, the DDJ-ERGO feels as good as it looks.