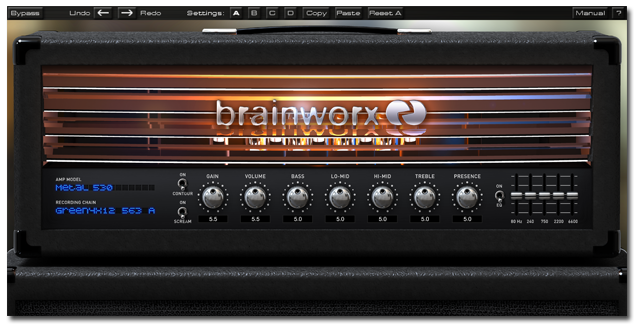 According to Ulrich, the original bx_rockrack broke new ground upon its June 15 release by “…not trying to emulate 112 amps with 254 microphones, but creating a plug-in that includes only a few amp heads, plus the complete recording chains of both Brainworx in Germany and The Mix Room in California.”

Whereas most amp simulators force users to endlessly tweak endless simulations that frustratingly fail to deliver the promised sounds, bx_rockrack takes a different approach: a few (perfectly) modelled tube amps and complete recording chains, cleverly captured in some of the world’s best-equipped recording studios by expert engineers. Simply select a speaker/recording chain, choose an amp, tweak the gain and EQ settings, and away you go! World-class guitar sounds, recallable and reliable. Sounds simple? It is — in use. Revolutionary? Without question!

Brainworx has helpfully merged the original ‘standard’ bx_rockrack and new bx_rockrack PRO into a single streamlined product line with all existing users automatically qualifying for a free upgrade; simply download the V1.1 installer and you’re good to go! Meanwhile, at $249.00 USD, the price remains unchanged for new purchasers.

Whatever your musical taste — be it rock, metal, jazz, fusion, or pop, why wait ten years to get your guitars to sound like the pros? Buying bx_rockrack PRO promptly delivers reputation-building results previously only possible in the best- sounding studios staffed by the most talented recording engineers direct to your (desktop) door. Or into your lap (top). No speaker emulator required. Got a guitar? Why wait at all?