Blue Cat’s StereoScope Multi 2.0 is a fully refreshed version of their multiple tracks stereo field analyzer and has just been released by Blue Cat Audio. It is a unique tool that enables the visualization in the stereo field of the audio signal of multiple instances on a single screen, in order to compare them or detect conflicts. Just like for the other plug-ins of now fully refreshed Blue Cat’s Multi Pack bundle, this new version comes with a completely redesigned user interface with improved workflow and readability, as well as many new features and enhancements: a new presets manager, new MIDI and automation mapping capabilities, many new presets, Windows AAX support, multiple display sizes, and much more (details below). 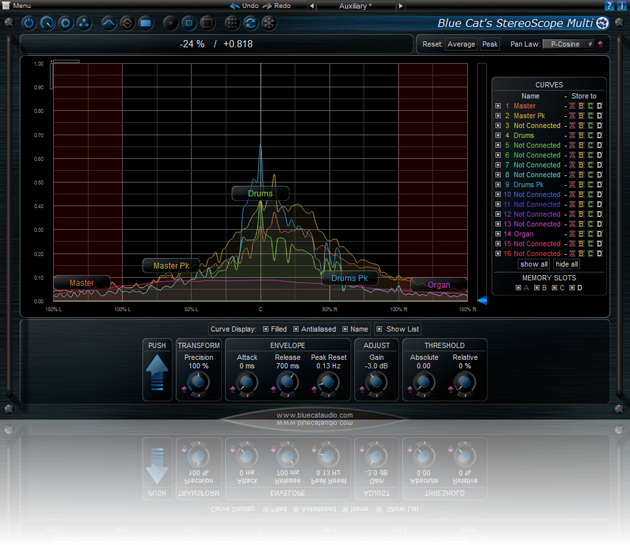 The plug-in is available alone or as part of Blue Cat’s Multi Pack, the company’s multiple tracks audio analysis solution. It can also be found in the Blue Cat’s Analysis Pack bundle that contains the company’s complete collection of audio analysis plug-ins. New customers can purchase both the analysis plug-in and its associated bundles with up to 15% off until the end of the month. Customers who recently purchased the plug-in will receive the upgrade for free, and others can upgrade to the new version for a small fee. Demo versions can be downloaded on www.bluecataudio.com, in VST, RTAS, AAX, Audio Unit and DirectX formats (32 and 64-bit).

—  Curves names can now be displayed on the graph (overlay).

– All instances can now be forced to synchronize.

– Automation range and response curve can now be customized for each parameter.

– Routing matrix automatically displayed when opening the plug-in for the first time for easier setup.