Universal Audio (UA), a leading manufacturer of professional audio recording hardware and software, is pleased to announce the impending release of the API 500 Series EQ Plug-In Collection for the UAD Powered Plug-Ins platform and Apollo High-Resolution Audio Interface. This API-endorsed, UA-developed collection features superior emulations of the legendary API 550A 3-Band and API 560 Graphic equalizers — two of the most popular and enduring audio equalizers ever made. 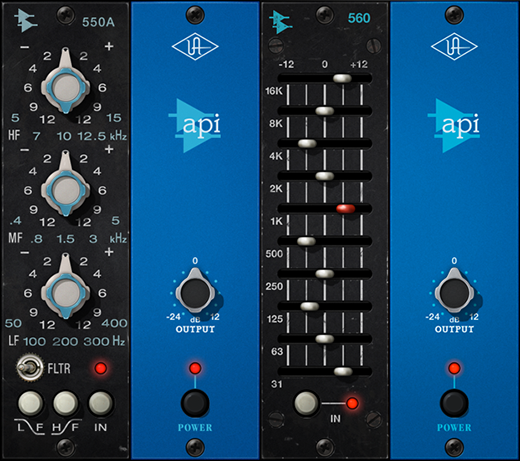 “With the blessing and assistance of API and the hard work of our top-notch DSP team, we’re proud to be releasing industry-leading emulations of the API 550A and 560 EQs,” says CEO and Founder, Bill Putnam, Jr. “We’re thrilled to be adding the iconic API sound to the UAD Powered Plug-Ins platform.”

“We are very pleased to see the development of API plug-ins for the UAD platform,” said Larry Droppa, API President. “The sonic integrity and audio performance of API products has always been our primary focus, and UA has demonstrated a proven track record with these same goals. We look forward to much success with this EQ collection and other API introductions to come.”

Available as part of an upcoming UAD Software release scheduled for February 2013, the API 500 Series EQ Collection will be available for $299US via UA’s Online Store.