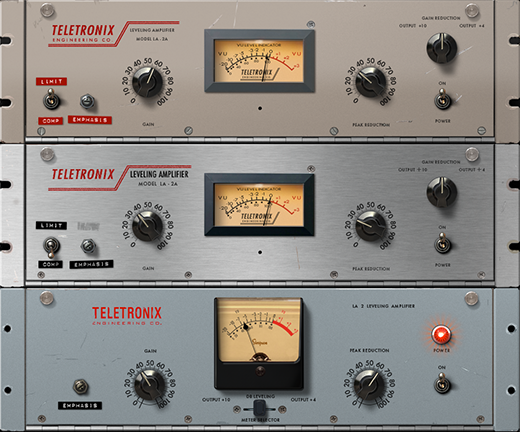 “While our original LA-2A plug-in provided a breakthrough rendition of the original hardware, we’ve learned a lot about analog emulation over the past 10 years,” explained Bill Putnam Jr., Founder and CEO of Universal Audio Inc. “Our new Teletronix LA-2A Classic Leveler Collection adds tube amplifier and transformer modeling, improvements in T4 gain reduction nonlinearities, and superior time constant behaviors. Put simply, these are the most musical and authentic LA-2A emulations ever created.”

The Bill Putnam-era LA-2A “Silver” model features a fast time constant, making it suitable on all sources, including drums and percussion. The Jim Lawrence-era LA-2A “Gray” model maintains an average time constant, providing a range of “medium-speed” compression. Finally, the LA-2 plug-in models the rarest of original Teletronix units, providing a super-slow compression response and a unique “mellowed” sound due to 50 years of luminescent panel aging.

Available as part of an upcoming UAD Software release scheduled for February 2013, the LA-2A Classic Leveler Collection will be available for $299US via UA’s Online Store, or for $149US for current owners of the original LA-2A Leveling Amplifier plug-in.