There are subtle plug-ins you put on the two-buss to give a nice gentle vibe to a track. Bitcom is not one of those. There is no “analog modeling” in this effect. There is no warmth or tube saturation. It is utterly devoid of anything to which the word “vintage” can be applied. Bitcom is a modern bit-shredding digital banshee that beggars description and lives on the edge of instability. 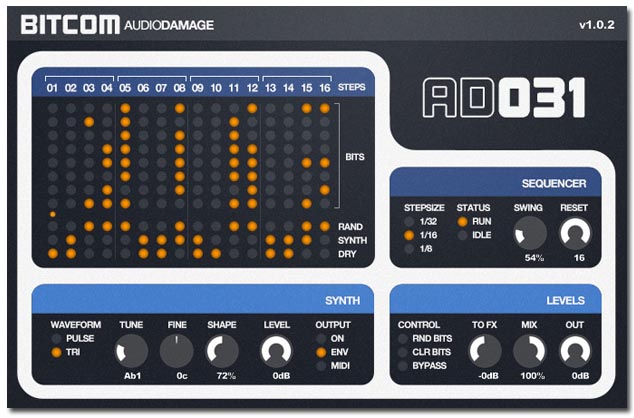 In a nutshell, a step sequencer drives a custom-designed bitcrusher, with a synth sidechain. But that sentence doesn’t begin to describe the abuse that Bitcom is capable of. We pulled out every trick in the book to build a modern electronic music effect that can turn even the most sedate input in to a swinging, screaming pain-monkey, wreaking havoc on lesser sounds.

Bit Banging: Bitcom’s bit engine is unique; each step has eight switches that (to simplify matters greatly) turn individual bits on and off. So all 8 switches on, and the output is pretty much like the input. Start turning them off and Strange Things Happen.

Synth Signal: Bitcom includes a simple monophonic synth that can either be always on, envelope driven, or controlled via MIDI. This is mixed with the input signal to create strange new sounds. Alternatively, Bitcom can be used without any input at all, as a moderately capable synth.

Sequencer: Bitcom’s step sequencer syncs to the host DAW. The sequence can be of arbitrary length from 1 to 16 steps, and the sequencer has internal swing.