LinPlug have released updates for their RMV software drummachine and Albino synthesizer. Next to the update they have announced a price reduction for the RMV upgrade (from RMIV or even RMIII). 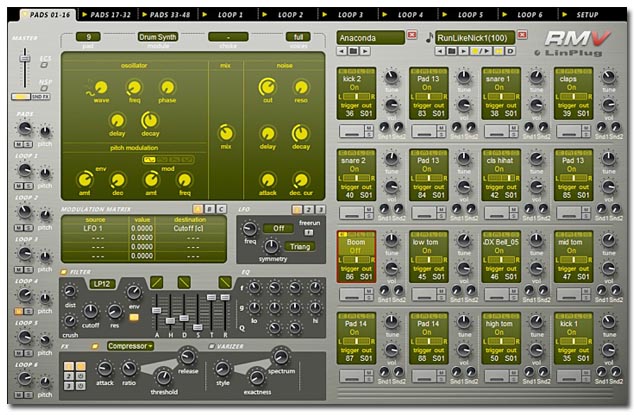 This fixes some long time (but not very common) problem when restoring loops, some of you reported this, but they rarely were able to reproduce anything, and if, it often the problem vanished right away, or so it seemed. Finally they have been able to smash a bug which could lead to either a loop not being displayed correctly or not played back correctly, after restoring a song/project in your daw. The bad news is that the bug is partly in the saving, so this fix will not magically repair any project that suffers from the problem, but prevent it from occuring again (and also fix an issue which is on the loading side only). So in any case, this is a recommended update. You find it right in the download tab at www.linplug.com/rmv.html.

Though its not on sale anymore we still care and today release update 3.2 which is free of charge and fixes a number of potential problems:
– fixed: GUI resize not working in Cubase 7
– fixed: Automation not working in Cubase 6.5 and up
– fixed: crash when switching presets rapidly
– fixed: Flanger might create distorted sound after a few hours of work
– fixed: microtuning might not work after song/project restore

You find it at the location mentioned in your registration mail, please get back if you need help locating it. Just to remind you: support for Albino is going to continue until at least end of May 2014.