Today Arturia released an app version of the Moog Minimoog called the iMini. This app is an an authentic recreation of the all-time classic Minimoog monosynth. The Arturia app is now available at Apple’s App Store. 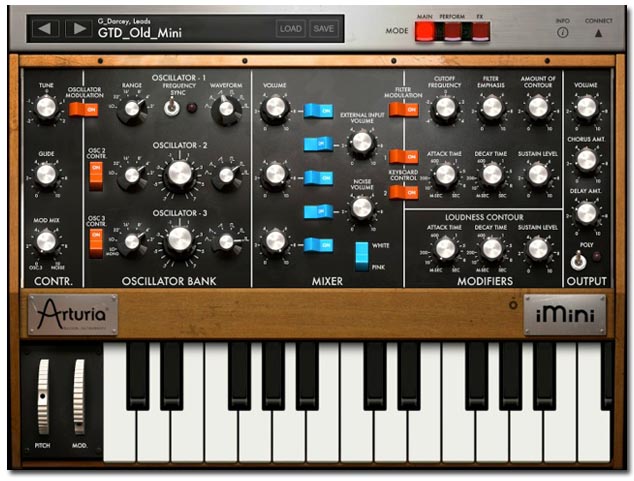 Arturia now brings the still-sought-after classic Minimoog sound to the musical masses, transforming any iPad mini, iPad 2, or iPad with Retina display into the ultimate analogue synth emulation! Those timeless three oscillators and that 24dB per octave fabled filter are all present and accounted for in iMini. It also successfully sports the look and feel of Dr Bob Moog’s namesake iconic synthesizer for all to see (and hear). But being a game-changing iPad app for 2013 and not an analogue synth design dating back to 1970 means there’s a whole lot more to iMini than first meets the eye…

Any serious synthesizer connoisseur will instantly recognise the MAIN mode screen as an eye-catching rendering of the Minimoog Model D front panel, albeit with welcome additional ‘analogue’ CHORUS AMT. and DELAY AMT. level controls, as well as a POLY switch for playing polyphonically — impossible in 1970, obviously! Other subtle supplements include a gearwheel icon above the keyboard — press to reveal GLIDE, DECAY, LEGATO, and SCROLL switches for performance keyboard control, plus a SCALE function to choose from no fewer than 26 different scales and modes. Meanwhile, iMini comes complete with hundreds of superb sounds showcasing its supreme sonic versatility; press LOAD from the menu bar and choose from sound designer or category — couldn’t be simpler!

And that’s not all: the CONNECT page is the gateway to making iMini talk to the outside world (using the Apple iPad Camera Connection Kit) — use WIST (Wireless Sync Start Technology) to sync the arpeggiator and delay to other iPad or iPhone apps, and integrate iMini into a complete studio environment via Retronyms Tabletop. This free iPad app allows multiple iMini instances to be simultaneously run; real-time performance recording into a sequencer; parameter automation; processing of third-party, Tabletop-ready apps through the iMini filter, and more. “iMini is an ideal Tabletop-ready app,” says Retronyms Co-Founder John-Paul Walton. “It’s a fresh take on a legendary synth, and comes packed with a ton of amazing presets — everything from retro space sounds to contemporary bass noise.”

Thanks to iMini, today there’s really no excuse for not taking that history-making Minimoog sound anywhere anytime. And in recognition of the groundbreaking instrument to which it owes its very existence, for every iMini sold, Arturia will make a donation to The Bob Moog Foundation, whose Executive Director, Michelle Moog-Koussa, kindly adds: “We are grateful to Arturia and Retronyms for donating part of the proceeds from the iMini in support of our mission to ignite creativity at the intersection of music, science, history, and innovation. A portion of this funding will go to support our educational initiative, Dr Bob’s SoundSchool, which teaches children the science of sound through the magic of music.”

For Frédéric Brun, Arturia’s President, the feeling is mutual: “We are delighted to donate to The Bob Moog Foundation and acknowledge our gratitude to Robert Moog, who helped us when we released our first virtual instrument, the Modular Moog V, back in 2003. We are also thrilled to work with Retronyms, who are a great company and a force to be reckoned with when it comes to iOS. The iMini sets a new standard for what a virtual instrument should sound like on an iPad.”

So let’s make music and help history come alive with iMini in more ways than one, and also support the dream of building the Moogseum (Bob Moog Museum), the convergence of The Bob Moog Foundation’s goals of inspiring and educating people through electronic music.