Designled technology startup ROLI introduces the Seaboard GRAND, a radically new kind of musical instrument and digital controller that reimagines the most iconic of musical instruments – the piano. An evolution of the piano keyboard, the Seaboard has a soft threedimensional surface that enables unprecedented realtime, intuitive control of the fundamental characteristics of sound: pitch, volume, and timbre. Piano and keyboard players can instantly transfer their skills to the Seaboard and begin exploring its new capacities. Pre-orders will start on april 14th, with only 88 Seaboards becoming available!

The Seaboard is the first electronic instrument to enable control of a wide variety of parameters through traditional techniques for expressiveness and virtuosity. As a controller, the Seaboard allows players to manipulate sound like never before. It authentically simulates a plethora of other instruments – guitar note bends, subtle string and horn swells, and much more are expressively created in seconds instead of hours.

Both as an instrument and as a controller the Seaboard creates a world of entirely new sonic possibilities, and provides a new bridge between acoustic and electronic approaches to music. 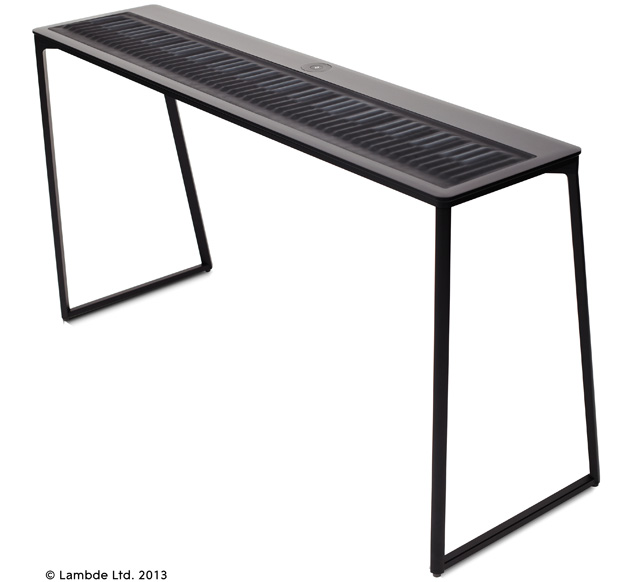 The Seaboard was invented by RCA Design Products graduate Roland Lamb. In 2011, ROLI – the company he founded – won a place in the Design London incubator, and secured grant funding from the Technology Strategy Board, the UK’s innovation agency. ROLI now employs 16 engineers, designers, and musicians in its warehouse studio/workshop in Dalston.

Advisory Board members include the designer and architect Ron Arad. The Seaboard is powered by the patentpending SEA Interface, ROLI’s disruptive platform sensor technology. SEA Interfaces are highly precise, informationrich, and pressuresensitive, and can be built in any form factor. They enable seamless transitions between discrete and continuous input, and capture threedimensional gestures while simultaneously providing the user with tactile feedback. ROLI is currently developing further applications in music, personal computing, robotics, medical devices, gaming, and vehicular and machine control.

The Seaboard GRAND will be featured in 2013’s South by Southwest music conference, where it has been selected to participate in the Music Accelerator, a showcase of the best new startup companies. Celebrated keyboard player Jordan Rudess of Dream Theater will be premiering the Seaboard with an exclusive  performance to demonstrate its versatility and musicality.

A limited edition of 88 Seaboard GRANDs will be available for preorder worldwide starting in April 2013. Each Seaboard GRAND will be handassembled to order in the ROLI studio in the heart of Dalston, East London, and, in recognition of its provenance, each will be named after a particular note on the piano keyboard, from A0 to C8.